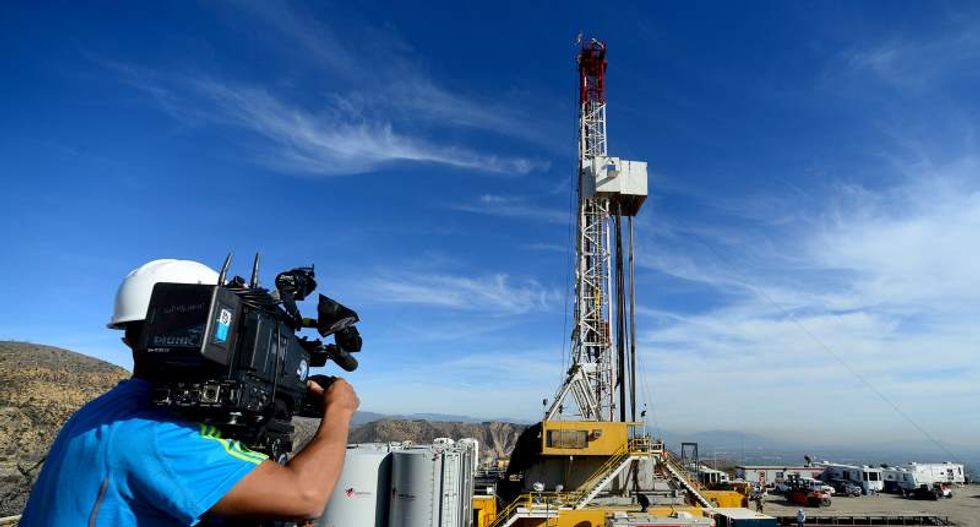 A TV cameraman works as crews from Southern California Gas Company and outside experts work on a relief well at the Aliso Canyon gas field above the Porter Ranch section of northwest Los Angeles, California in this Dec. 9, 2015 pool photo. (Reuters/Dean Musgrove/Pool)

Air quality regulators agreed on Wednesday to scrap a proposal to capture and burn off some of the methane spewing into the air from a subterranean pipeline rupture that has forced thousands of Los Angeles residents from their homes since October.

But the five-member hearing board of the South Coast Air Quality Management District, meeting for a third time this month to review the problem, delayed action again on a larger plan for addressing the gas leak, ranked as the worst ever in California.

The board instead scheduled a fourth meeting for Jan. 23, at a venue closer to affected neighborhoods, to take more testimony and possibly vote on the proposed abatement order.

The stench of odorized methane fumes has sickened scores of people and led to efforts to temporarily relocate more than 6,000 households from the Porter Ranch community of northern Los Angeles at the edge of the leaking Aliso Canyon gas storage field.

The draft abatement order originally called for Southern California Gas Co., owner of the facility, to install a system to siphon off and incinerate a portion of the escaping methane. But the air quality board stripped out that requirement after the company's engineers raised safety concerns, as did local and state agencies, board spokesman Sam Atwood said.

The proposal still would impose additional monitoring and reporting requirements, and order SoCal Gas to withdraw as much of its remaining gas reserves at the site as it can as quickly as possible while maintaining reliable supplies for customers.

The accelerated gas extraction is designed to ease pressure on the ruptured wellhead and slow the leak - a measure the company said it has already implemented.

Disgruntled residents have demanded that the 3,600-acre (1,457-hectare) facility, where surplus gas is pumped underground and stored until needed, be shut down altogether. Many have complained of headaches, nosebleeds, dizziness and respiratory distress.

Atwood said closure of the facility is not under consideration by the board.

Several attempts to halt the leak have failed, and the company projects it may take until late February to plug the rupture through a relief well that engineers began drilling in December.

Methane, the prime component of natural gas and a far more potent greenhouse gas than carbon dioxide, was seeping out of the site at the rate of 58 metric tons per hour in November, accounting for one-fourth of all methane emissions statewide, the California Air Resources Board reported at the height of the leak. But the flow has diminished sharply since then.