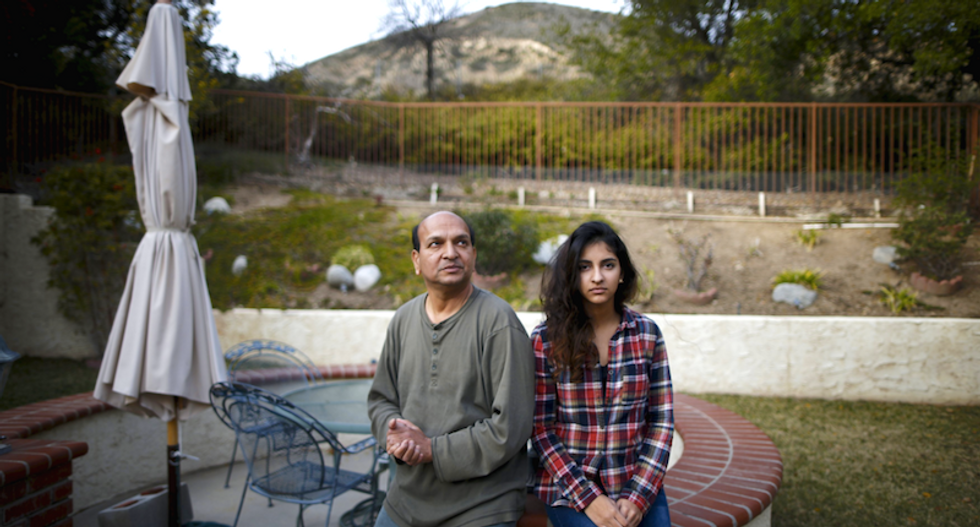 Malind Kumbhojkar, 55, sits with his daughter Simrun Kumbhojkar, 19, in the garden of their Porter Ranch home near the site of the Aliso Canyon storage field where gas has been leaking in Porter Ranch, California, United States, January 21, 2016. (REUTERS/Lucy Nicholson)

Long before a natural gas storage well sprung a disastrous leak near Los Angeles, utilities and national industry groups were raising alarms about the danger of aging underground storage infrastructure.

Twenty-six of its wells were “high risk” and should be abandoned -- even though they complied with state regulations, the utility wrote in a rate filing.

The previous year, Pacific Gas & Electric pointed to an absence of safety standards for storage wells as reason to launch its own monitoring program that went beyond state rules, according to an internal document obtained by Reuters.

The industry’s rising concern underscores the scant oversight of 400 underground natural gas storage facilities in 30 U.S. states. Most storage fields are regulated by states, but national industry groups have pushed for federal oversight -- unusual in an industry better known for fighting regulation.

Jurisdiction over facilities storing gas to be transported across state lines falls to the U.S. Pipeline and Hazardous Materials Safety Administration. But the agency has never written rules for gas storage despite two decades of sporadic calls for regulation -- and at least two deadly explosions.

Under state oil and gas regulations, Southern California Gas faces a maximum penalty of $25,000 for the leak near Los Angeles, which is unprecedented in scale. The well has spewed methane -- a potent greenhouse gas -- since October and displaced thousands of people in nearby Porter Ranch.

A bill introduced Tuesday by State Senator Fran Pavley calls for penalties of up to $25,000 per day for active leaks. It would also require the installation of automatic shutoff systems on all wells and continuous monitoring of wells within 10,000 feet of homes and schools.

Utilities and regulators have been “gambling” with wells that in many cases were drilled in the 1950s, Pavley said. She described their standard practice as, “Don’t fix it until it leaks or cracks or breaks.”

Southern California Gas, a division Sempra Energy, said it has inspected wells more rigorously since 2014, even though state utility officials have not approved a rate hike to cover the cost, said company spokeswoman Kristine Lloyd. The inspections, she said, “exceed traditional industry practices and regulatory requirements.”

Lloyd said she did not know if the leaking well in Aliso Canyon was among the 26 wells the company said should be abandoned because they are too old or “mechanically unsound,” as the rate filing described them.

A month before the well failed, the nation’s leading oil and gas lobbying group, the American Petroleum Institute, published 60 pages of guidelines for monitoring and maintenance of storage wells. Other industry groups have supported having the API standards adopted as federal regulation.

“Up and down, the general consensus is that the regulations that exist in California are wholly insufficient.”

The fracking boom has intensified pressure on the nation’s aging system of underground storage. About 20 percent of gas used in the U.S. during winter now comes from storage fields, according to the American Gas Association.

Many of the facilities are depleted oil or gas reservoirs that have been converted to store natural gas, which is then pulled from the ground by wells.

The Aliso Canyon leak increased the state’s methane emissions by 25 percent in its first month, estimated the California Air Resources Board. Methane is 72 times more potent as a greenhouse gas than carbon dioxide in the 20 years after it is emitted, according to CARB.

Initial efforts to plug the well with mud and brine failed. The utility is now drilling two relief wells more than 8,500 feet below the surface and planning to pump in water and cement. The utility said on Monday that it expects to stop the leak by late February.

In its 2014 rate filing, the utility sought $180 million in rate increases over six years to evaluate its storage wells. The California Public Utility Commission has made no decision in the rate case.

The CPUC also has not decided on a request from PG&E for more than $1 billion in rate increases to finance maintenance of its gas pipeline and storage infrastructure.

The commission did not respond to repeated requests for comment for this story.

The company said it was working to fill this “gap” by helping API develop its guidelines. The industry group’s recommendations go into minute detail on matters including how storage facility data should be collected, how staff should be trained and how emergencies should be handled.

PG&E is working to incorporate those practices into its operations, spokesman Greg Snapper said.

Concerns about the nation’s natural gas infrastructure have intensified since 2010, when a PG&E pipeline exploded, leveling an entire neighborhood in San Bruno, California, and killing eight people.

The National Transportation Safety Board later blamed PG&E for lax pipeline safety and faulted both the California PUC and the federal pipeline regulator for weak oversight.

California's oil and gas regulator -- the Division of Oil, Gas and Geothermal Resources -- acknowledged problems with oversight but pointed to an effort launched before the leak to update regulations.

The industry also has an incentive to police itself, said agency spokesman Don Drysdale.

"Regardless of the regulations, it's in an operator's interest not to have leaks, because that means they're losing their product," he said.

The lack of federal oversight has been debated sporadically for more than two decades.

Federal regulators declined to assume authority over gas storage facilities after three people were killed in a 1992 explosion at an underground cavern operated by Seminole Pipeline Co near Brenham, Texas.

That decision was criticized after a 2001 gas leak in underground salt caverns in Kansas caused explosions that killed two people.

The facility fell under federal jurisdiction, but federal and state regulators hit legal snags when they explored how to penalize the facility's operator, El Paso Corp, which sent its gas across state lines.

Kansas was forbidden from regulating interstate commerce -- and the federal agency had not written rules it could enforce.

A decade later, in 2011, the federal Pipeline and Hazardous Materials Safety Administration asked industry groups whether they supported federal regulation of storage facilities in such cases. The industry supported oversight, but the agency has still not crafted regulations.

Last year, U.S. Senator Pat Roberts, a Republican from Kansas, introduced a bill targeting "a dangerous lapse in the oversight” and proposing that states take over regulating all stored gas, even when it is slated for interstate transport.

A separate safety bill including the same provision passed a key Senate committee in December. It also directs the federal government to craft national safety standards for underground gas storage within two years.