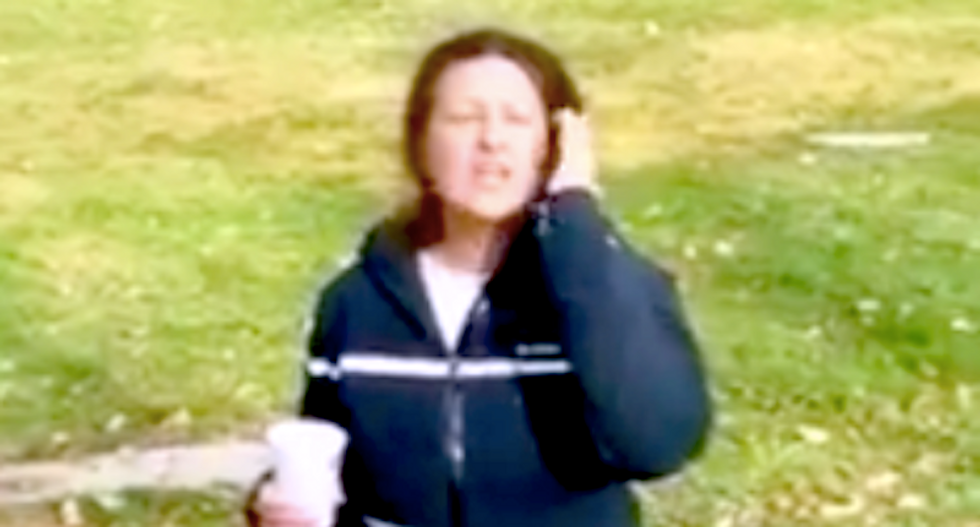 The California woman who became a Facebook celebrity after she was filmed attacking and throwing coffee on a group of Muslims praying in a park now claims she is the victim of harassment and wants a judge to put an end to it, reports the Contra Costa Times.

Fifty-year-old Castro Valley resident Denise Slader entered a plea of not guilty on Thursday on misdemeanor hate crime and battery charges, stemming from the incident that occurred on Dec. 5 of last year.

Slader was filmed berating the praying Muslims before throwing her coffee at them as a park ranger intervened. Video taken of the incident was placed on Facebook before going viral and entered into evidence against the woman.

Appearing in court, the longtime California Department of Corrections employee complained to the judge that she was being harassed by the man who shot the video  -- Rasheed Albeshaeri --  and his supporters.

Defense attorney Jerry Lipkin asked the judge to order Albeshaeri and his friends to stop contacting Slader -- a charge that was dismissed by Alameda County deputy district attorney Tim Wellman.

According to Wellman, Slader has only  received one anonymous letter and there is no evidence it came from Albeshaeri.

"To conclude it's coming from the victim is pure and rampant speculation," Wellman said.

In a phone interview, Albeshaeri said he hasn't contacted Slader, and he doesn't know of anyone who has.

"If someone harassed or threatened her like she claims, I'm against that," Albeshaeri said. "I don't support that."

Despite a request from the prosecutor to set Slader's bail at  $10,000 bail, Judge Andrew Steckler released the woman on her own recognizance and ordered her to not contact Albeshaeri and to stay away from Chabot Regional Park where the incident occurred.

Her trial has been set for April 4.