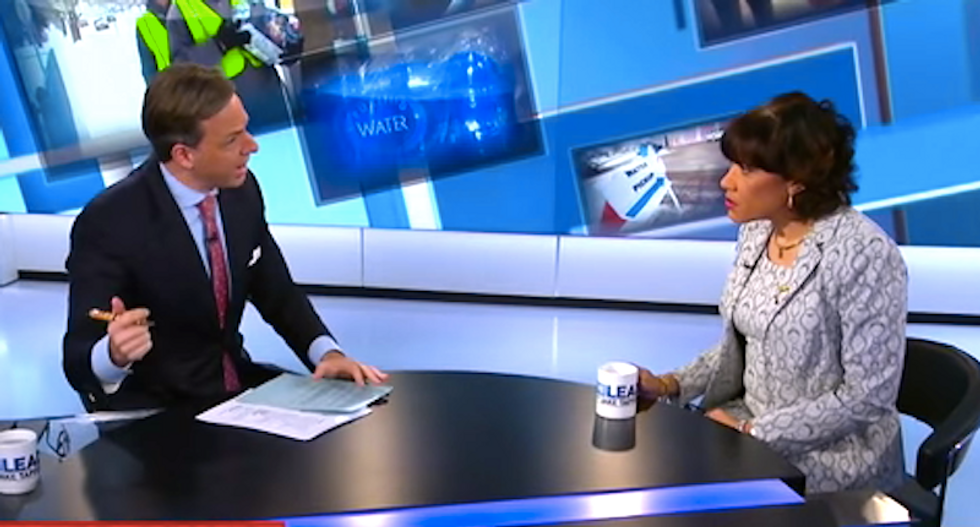 CNN's Jake Tapper promised Flint's mayor that he would help "shame" officials who caused and then covered up the Michigan city's water crisis.

Mayor Karen Weaver, who rode a wave of voter anger over the situation into office in November, said she noticed something wrong with the water immediately after the city stopped buying pretreated Lake Huron water from Detroit and instead began drawing its supply from the Flint River.

Weaver said she refused to drink the water, which has been found to contain high levels of lead and may have contributed to the deaths of 10 residents from Legionnaires' disease.

"I had concerns about the Flint River water right from the beginning," the mayor said.

She said the $28 million promised by Republican Gov. Rick Snyder was not nearly enough to help the city recover.

"There have been estimates out there, but that's only about infrastructure," Weaver said. "That's why we can't say exactly what we need, because how do you put a cost on what's happened to what we've done to people, what's happened to them? And we know we have kids that are going to need lifelong services and support. How do you put a cost to that?"

Weaver said blame for the water crisis -- and the delayed response to resident complaints -- should be shared by federal, state and local officials who knew about the health risks but failed to warn residents the water wasn't safe to drink.

"That's been part of the problem is the buck has been passed around and passed around, and there's been a lot of finger-pointing," she said. "So a lot of people knew what was going on, but nobody came forward in a timely manner. Because, like I said, this will be almost two years in April (since the Environmental Protection Agency confirmed the water was unsafe). It took almost a year for us to get that information."

Tapper invited the mayor to appear on his program again to ensure that government officials did not ignore the water crisis.

"Let us know what's going on," Tapper said. "Stay in touch with my staff, and when you're not getting the response you need from Gov. Snyder or from President (Barack) Obama, you let us know. You come on TV, and we will shame them."

He then apologized on behalf of his program for failing to address the story quickly enough.

"I'm sorry that it took us so long to get on this story," Tapper said.

Edit: An earlier version of this story indicated that Tapper had apologized on behalf of CNN, but he clarified that he had been speaking only for himself and his program.