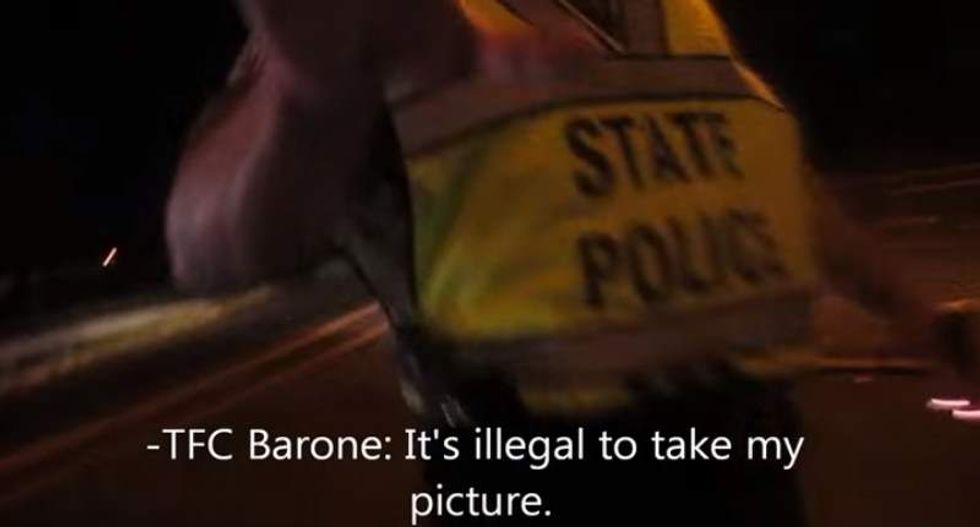 A Connecticut state trooper is seen trying to stop Michael Picard from filming him in video released on Jan. 25, 2016. (YouTube)

Newly-released video claims to show three Connecticut state troopers falsely charging a detained man after wrongfully arguing that it was illegal to film them on public property, the Free Thought Project reported.

The footage, which was posted on Monday, documents Michael Picard's encounter with the troopers last September, when he and a friend were detained while standing on a highway to warn motorists about a DUI checkpoint in Hartford, Connecticut.

"It's not that I'm against catching drunk drivers," Picard says in the video. "It's that checkpoints cost too much and catch too few drunk drivers. Checkpoints do not belong in a free society."

One trooper, identified as Jeff Jalbert, is seen approaching Picard's friend and saying that they were called to the scene because "somebody just said that one of you guys had a gun on them." Picard states that he is carrying a gun, but that he has a permit allow him to do so.

Trooper First Class John Barone is later seen in the video reaching for Picard's phone and telling him it was illegal for him to be filmed on a city street.

"Did you get any documentation that I am allowing you to take my picture?" Barone asks.

"No, but you're on public property," Picard replies.

Barone then seizes Picard's camera, but does not realize it captures his discussion with Jalbert, Sergeant John Jacobi, and an unidentified trooper after noting that Picard's gun is legal. Barone can be heard asking his colleagues, "Want me to punch a number on this? Gotta cover our ass."

Later, Jacobi recommends to the group, "I think we do simple trespass, we do reckless use of the highway and creating a public disturbance. All three are tickets."

"Then we claim that, um, in backup, we had multiple people, um, they didn't want to stay and give us a statement, so we took our own course of action," an unidentified trooper adds.

Picard received a citation for creating a public disturbance and reckless use of a highway by a pedestrian.

The phone was later returned to Picard. He told the Free Thought Project that during his first court appearance on Jan. 14, prosecutors offered to fine him $25 instead of the original $300 "to make the case go away."

"I rejected the deal because I did nothing wrong," he said. "As of now, the prosecutor has not dropped the case despite having video evidence of police misconduct."

Watch Picard's video, as posted online on Monday, below.