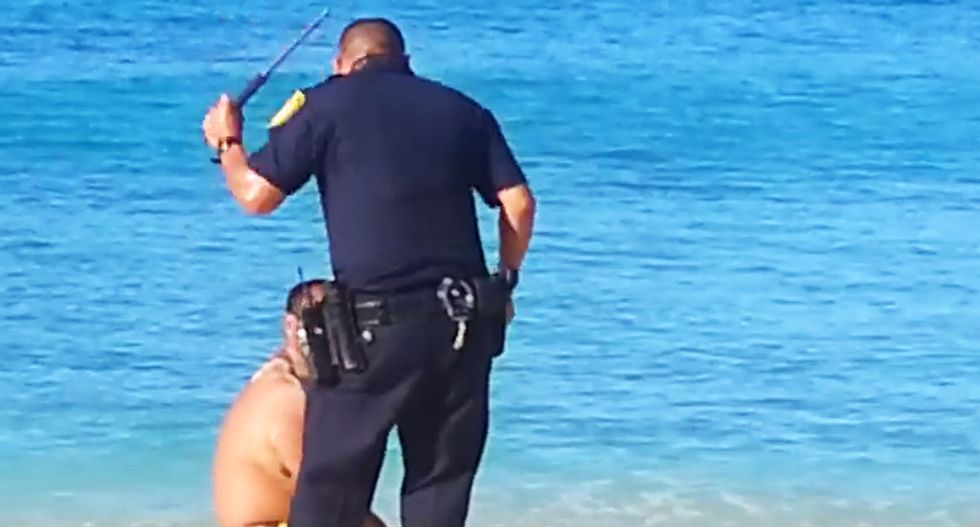 A Hawaiian man has filed a lawsuit against a Honolulu police officer, and the city that employs him, after the cop savagely beat him for praying next to a sun-bathing Hawaiian monk seal on the beach.

According to Courthouse News, Jamie Kalani Rice was on Nanakuli beach on Sept. 10, 2014, when he approached a seal lying on the sand, believing it to be injured or dying. Rice then sat about ten feet away from the seal, chanting and rubbing sand between his hands and on his body as part of a ritual prayer.

Because the area was posted with a "Do not disturb" sign asking visitors to not harass the seals, a bystander called police and officer Ming Wang responded.

In the video, Wang can be seen approaching and speaking with Rice as he knelt in the sand, before snapping his baton out and later grabbing a can of pepper spray and shaking it menacingly.

After the seal moved farther away from the men, Rice got up and walked back down the beach with Wang trailing him.

Following Rice as he picked up a plastic bag with his belongings, Wang suddenly raced in front of the retreating man and sprayed him in the face with the pepper spray. When Rice did not respond to the spray, Wang took his baton out and beat Rice repeatedly while he stood there unresisting.

Eventually Rice dropped to his knees and then face down in the sand as Wang continued to strike him with the baton before kicking him.

According to Rice's lawsuit, he suffered a broken right hand from the beating, and claims the beating was unjustified because "he at no time posted a threat, resisted or struck Wang."

Rice insisted that he thought the seal was sick and that he was only sharing his "mana" ---or life force -- with it.

The Hawaiian man did plead no-contest to obstructing a government operation, a misdemeanor, after prosecutors dropped charges of resisting arrest against him.

While prosecutors initially declined to investigate charges against Wang for the beating, the case was reopened after the video was released.

According to court documents, Wang is still on patrol, but working in a different area of Honolulu.