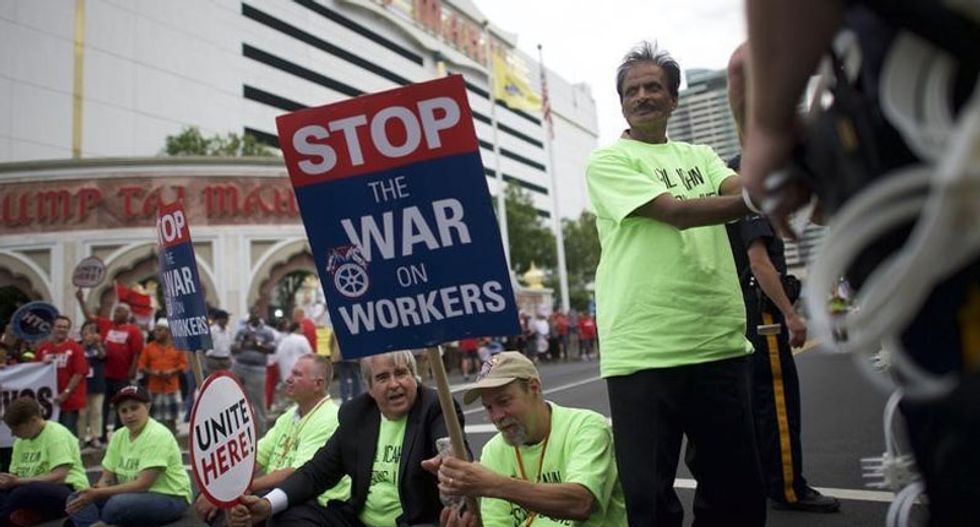 A man is placed in hand cuffs for an act of civil disobedience in blocking traffic to the Trump Taj Mahal in Atlantic City, New Jersey June 17, 2015. REUTERS/Mark Makela

The owner of the Trump Taj Mahal casino in Atlantic City, New Jersey, may break its agreement with union workers, a U.S. appeals court ruled on Friday, potentially clearing the way for the company to exit Chapter 11 bankruptcy.

Donald Trump, the Republican presidential candidate and celebrity real estate developer, has said he no longer has a stake in the company he founded and which still bears his name.

Trump Entertainment Resorts Inc in 2014 filed for bankruptcy and last year it convinced a U.S. bankruptcy judge that it had to impose a new lower-cost contract on unionized workers in order to secure a rescue deal with billionaire Carl Icahn.

In Friday's ruling, a three-judge panel of the 3rd U.S. Circuit Court of Appeals in Philadelphia sided with Trump Entertainment, saying a bankruptcy judge must be free to evaluate a labor contract that may determine the fate of a business.

"Under the policies of bankruptcy law, it is preferable to preserve jobs through a rejection of a CBA, as opposed to losing the positions permanently by requiring the debtor to comply with the continuing obligations set out by the CBA," Judge Jane Roth wrote in a 30-page opinion.

Unite Here's president said in a statement the union would evaluate its options, including possible legal steps.

"The Taj Mahal will never turn around and be successful without the full participation and involvement of its workers. That won’t happen while people have to worry about their future," said Bob McDevitt, president of United Here.

Trump Entertainment's Taj Mahal was the city's largest casino when it opened in 1990 and employed about 3,000 people when the casino group filed for bankruptcy, of which around 1,500 were union members.

The company said in court documents that defeating the union's appeal was a condition to exiting U.S. bankruptcy protection.

Trump Entertainment did not immediately respond to requests for comment.