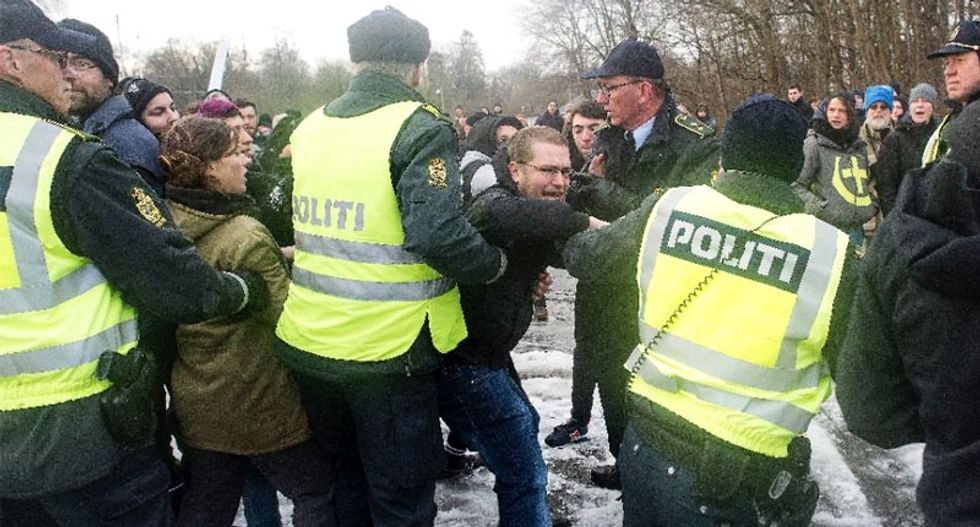 Police try to separate pro-migrant and anti-migrant protesters on the Danish-German border on January 9, 2016 in Krusaa, Denmark (AFP Photo/Claus Fisker)

Danish lawmakers on Thursday gave a final nod to drastic reforms curbing the rights of asylum seekers as legal and human rights experts castigate Copenhagen for turning its back on its international commitments.

Danish Foreign Minister Kristian Jensen was coincidentally to appear before the UN in Geneva later Thursday for a review of Denmark's human rights policies, a routine procedure for UN member states but where the migrant bill was expected to arise.

In Copenhagen, the Danish speaker of parliament presented the bill Thursday in its final form to the assembly for its second reading, and was a last chance for lawmakers to demand changes.

Just one request was presented and swiftly rejected by legislators, as a majority have already agreed to back the bill in its existing form following thorny negotiations.

As a result, Prime Minister Lars Lokke Rasmussen's minority right-wing government, supported in parliament by an anti-immigration far-right party that has for 15 years dictated increasingly restrictive immigration policies, is assured of winning a January 26 parliamentary vote.

Fearing a domino effect across Europe, the UN refugee agency UNHCR has decried the bill, saying it "could fuel fear (and) xenophobia".

Once a champion of refugees' rights, Denmark would be in violation of the European Convention on Human Rights, the UN Convention on the Rights of the Child, and the UN Refugee Convention, the UNHCR concluded in a January report.

Unfazed, Copenhagen maintains it is not able to finance more migrants nor integrate them into society.

The confiscation of migrants' valuables has been the reform that has dominated international headlines.

The bill allows Danish authorities to seize asylum seekers' cash exceeding 10,000 kroner (1,340 euros, $1,450), as well as any individual items valued at more than 10,000 kroner. Wedding rings and other items of sentimental value are exempt.

Legal experts have however voiced more alarm over the measures, which make it harder to obtain family reunifications and residency permits.

Copenhagen wants to increase from one year to three years the waiting period for war refugees before they can apply to bring over their family members.

"According to the European Court of Human Rights, the processing of family reunification cases must be expeditious, flexible and efficient with special attention and care," the director of the Danish Institute for Human Rights, Jonas Christoffersen, told AFP.

"This is not consistent with a three-year waiting period."

Undeterred, Rasmussen has suggested Denmark may seek a revision of the UN Refugee Convention if the migrant crisis "continues or gets worse".

In a January 15 letter to Stojberg, the Council of Europe's commissioner for human rights, Nils Muiznieks, said the issue of family reunifications raises "issues of compatibility with Article 8 of the European Convention on Human Rights which protects the right to respect for one's family life."

The bill "could also infringe on the rights of children to live within their family environment, as prescribed by the United Nations' Convention on the Rights of the Child."

"Those are his personal views," Venstre's Jensen retorted.

"The Council of Europe, as an organisation, has not started any type of case against Denmark," he told AFP.

Home to 5.6 million people, Denmark registered 21,000 asylum applications in 2015, making it one of the top EU destinations per capita for migrants after Finland, Austria, Germany and Sweden.