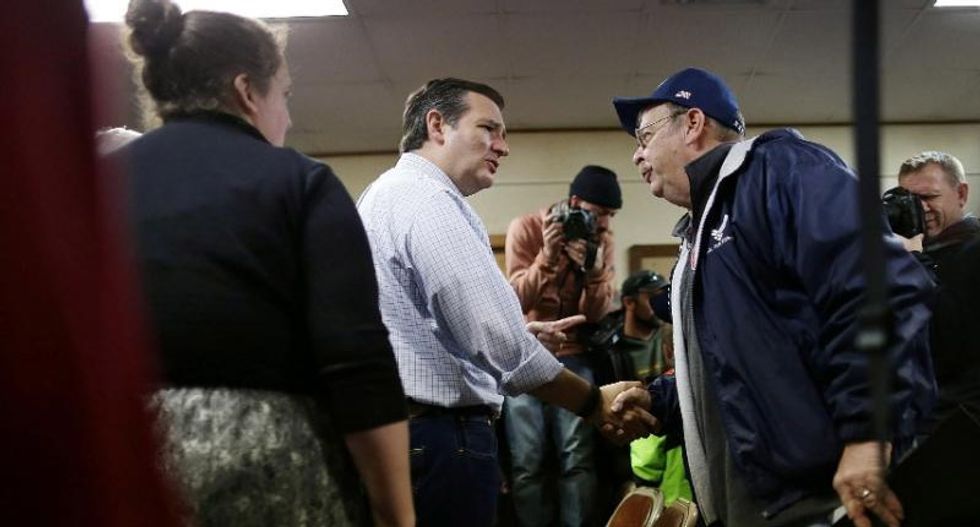 Billionaire Donald Trump and Senator Ted Cruz are virtually tied in Iowa just six days before Republicans there cast the first votes for a presidential nominee, a new poll out Tuesday has found.

The Quinnipiac University poll put Trump slightly ahead of Cruz at 31 to 29 percent of likely Republican participants in the Iowa caucuses, which take place Monday.

Trailing far behind the leaders at 13 percent was Senator Marco Rubio. No other candidate polled more than seven percent.

"If the events of the last two weeks haven't moved the needle, one wonders what would change it in the next six days," he said.

Trump leads Cruz by nearly 17 percentage points nationally, according to the RealClearPolitics average of recent country-wide polls. But in Iowa it is a different story.

The Quinnipiac poll showed no significant change in standing over the past month despite an escalating verbal battle between Trump and Cruz.

It showed no gain for Trump from last week's endorsement of him by Sarah Palin, a onetime Tea Party favorite. Nor does Cruz appear to have been hurt by Iowa Governor Terry Branstad's urging his fellow Republicans not to vote for the Texas senator.

Nevertheless, the pollsters said the race remains highly volatile as it goes down to the wire: nearly 40 percent who have chosen a candidate say they could still change their mind.

Turnout and the effectiveness of candidates' field organizations will be crucial in the end, said Brown.

The voting takes place in local meetings held around the state, a primary process unique to Iowa that favors well-organized activists.

"One thing is increasingly evident, the conservative wing of the Republican Party, at least in Iowa, is carrying the day," Brown said.

The poll found that Cruz leads Trump by substantial margins among Tea Party members, white Christian evangelicals, and voters who describe themselves as "very conservative."

Retired neurosurgeon Ben Carson has 11 percent support from evangelicals, while Rubio is at 10 percent.

Trump's credibility with evangelicals may have received a boost Tuesday with an endorsement by evangelical leader Jerry Falwell, Jr who heads Liberty University, which bills itself as the largest Christian university in the world.

Trump "is a successful executive and entrepreneur, a wonderful father and a man who I believe can lead our country to greatness again," Falwell said in a statement.