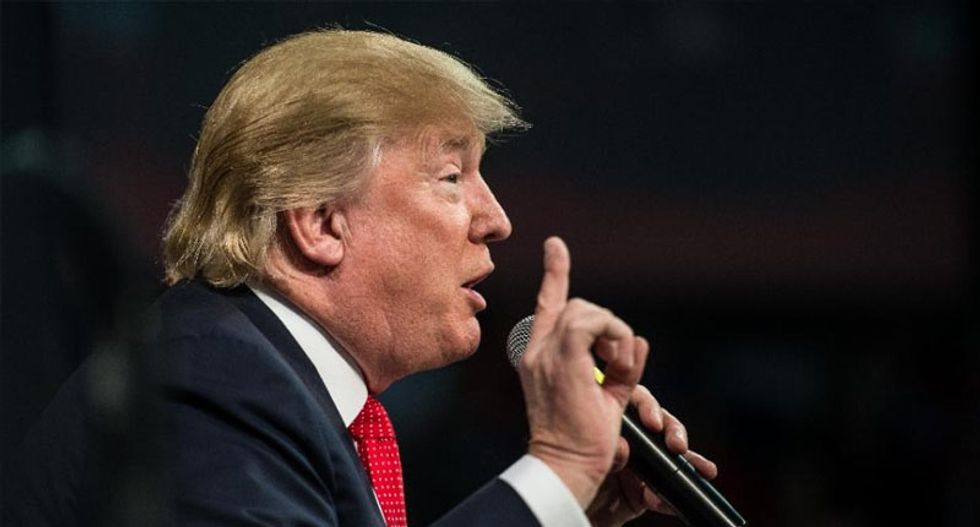 Donald Trump speaks to the crowd at a town hall meeting on December 12, 2015 in Aiken, South Carolina (AFP Photo/Sean Rayford)

U.S. presidential candidate Donald Trump on Wednesday escalated a fight with Fox News, using the word "bimbo" in a derogatory tweet about anchorwoman Megyn Kelly after he dramatically pulled out of a debate only days before the first votes of the 2016 campaign are cast.

Trump on Tuesday withdrew from the televised encounter, scheduled for Thursday night in Des Moines, Iowa, irritated at host Fox News for allowing Kelly to moderate after her questioning had angered him in a debate last year.

The real estate magnate, who is the Republican front-runner to win the nomination for the Nov. 8 presidential election, followed up with a thinly veiled insult on Wednesday.

"I refuse to call Megyn Kelly a bimbo, because that would not be politically correct," he wrote on Twitter. "Instead I will only call her a lightweight reporter!"

Trump's withdrawal means the last televised debate before the Iowa caucuses on Monday will not feature the man who has dominated the Republican race for months and leads many opinion polls. The caucuses are the first contest in the nation to choose the Republican presidential nominee.

Trump has been feuding with Fox News since the network put on the first Republican debate in August, when Kelly asked Trump about his treatment of women, prompting a stream of insults from the candidate and complaints of not being treated fairly.

Trump's main rival in Iowa, U.S. Senator Ted Cruz of Texas, poured scorn on the billionaire for pulling out of the debate.

In Twitter posts, Cruz likened it a comical retreat from a "Monty Python" sketch and accused Trump of "trembling at being questioned" by Kelly.

Cruz used the hashtag #DuckingDonald to make fun of the former reality TV star for ducking out of the debate and tweeted a mocked-up picture of Trump's head on Donald Duck's body sitting on a pile of money.

Cruz, a conservative and a debating champion in college, challenged Trump to a one-on-one debate.

Another Republican hopeful, U.S. Senator Rand Paul from Kentucky, told Fox News that he welcomed Trump’s absence from the debate stage because it means "we don’t have to put up with a lot of empty blabber and boastfulness and calling people names.”

New Jersey Governor Chris Christie, who is also in the Republican race, described Trump’s decision at such a crucial time as “a big mistake” which calls into question his ability to be president.

“Anytime you get a podium and a microphone and 15-20 million people watching in an election campaign, you should take it,” Christie told Boston Herald Radio.

U.S. Senator Marco Rubio of Florida, also a Republican candidate, said he wanted to focus on keeping the party united so as to beat Hillary Clinton, the former secretary of state, in November if she becomes the Democratic nominee.

"These kinds of theatrics by Ted Cruz and Donald Trump are an entertaining sideshow, but they have nothing to do with defeating Hillary Clinton," Rubio said.

Trump campaign manager Corey Lewandowski said on television programs on Wednesday that Trump was not afraid to debate his rivals or take reporters' questions. He added that Trump would be happy to debate Cruz if the contest, which includes 12 Republicans vying for the nomination, narrows.

"If it comes down to a two-person race, Donald Trump would be happy to debate him," Lewandowski told ABC's "Good Morning America" program.

Fox News, in a statement on Tuesday, said it would not "give in to terrorizations toward any of our employees," but left the door open to Trump attending the debate. The event will be co-hosted by Google .

Trump has said he will instead hold an event for veterans.

"At the end of the day, Mr. Trump is going to have the last laugh," Lewandowski told MSNBC.