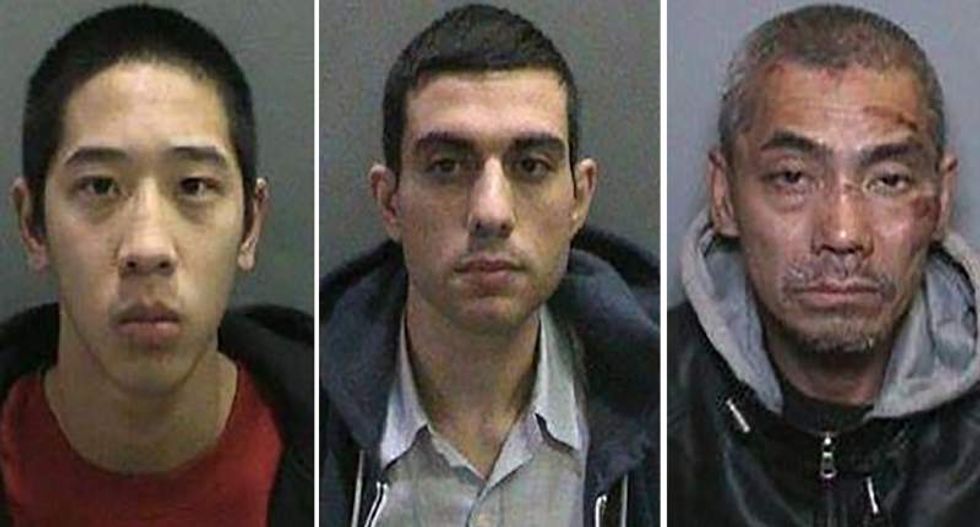 One of three inmates who escaped a week ago from a maximum-security jail in Southern California has been taken into custody after surrendering to law enforcement, while the other two were believed to be in the Bay Area, police said on Friday.

Carrie Braun, a sheriff's spokeswoman, said Duong apparently surrendered "because of the pressure that was being put on him by the general community" during an exhaustive, week-long manhunt.

Duong broke out of the Orange County Men's Central Jail in Santa Ana on Jan. 22 along with Nayeri and Tieu.

Duong and Tieu are both reputed to be connected with Vietnamese-American street gangs, and Hallock said Nayeri and Tieu may have chosen San Jose due to its large Vietnamese population. He said they may be heading to Fresno next.

Nooshafarin Ravaghi, a community college instructor who taught at the jail and had befriended Nayeri, was arrested on Thursday on suspicion of assisting in the escape by furnishing the inmates with Google Maps information that included overviews of the jail rooftop and surrounding areas.

Ravaghi and Nayeri had also exchanged handwritten letters outside of class that were personal in nature, sheriff's office Hallock told reporters earlier on Friday.

Nayeri, the presumed mastermind of the breakout, was in jail on charges stemming from the 2012 mutilation torture of a kidnap victim.

Tieu was facing murder charges and Duong charges of attempted murder and assault with a deadly weapon, among other crimes.

Hallock said it was Duong who on Sunday took what was supposed to be a test drive in a utility van advertised for sale in south Los Angeles and never returned.

Authorities say the men made their getaway by cutting through steel grating inside the jail, climbing through a plumbing conduit to the roof and lowering themselves four floors with bedsheets to the ground. Their disappearance went unnoticed for about 16 hours.

Ravaghi is expected to be arraigned on Monday.

In a high profile New York prison break last year, the fugitive inmates had help from a female prison employee who allegedly had sexual relations with one of them. She was sentenced to seven years for her role.