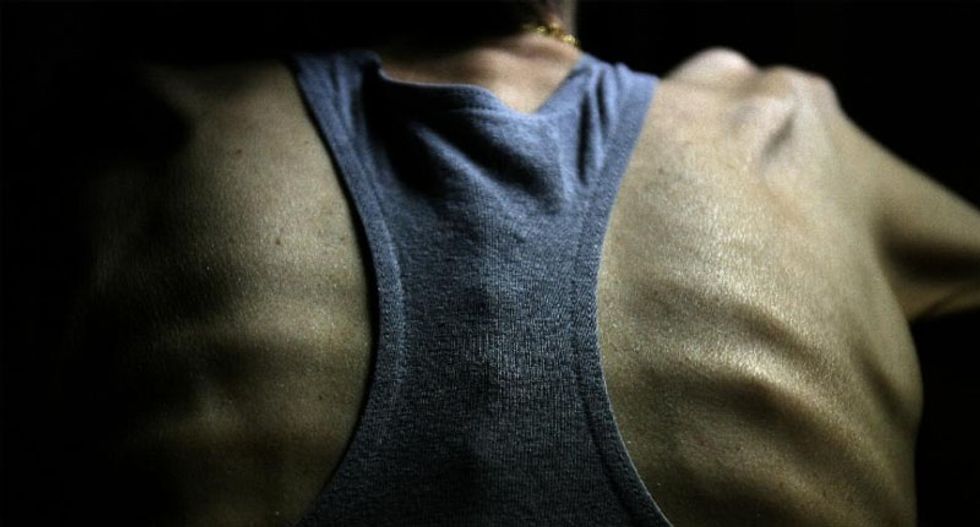 It was the stuff of dreams: walking down a Paris street one day to walking the runway as a top 20 model in the world's fashion capital.

That's exactly what happened to Victoire Macon Dauxerre at 18 as she prepared to graduate from high school in 2011.

But that dream was short-lived.

In just a few months Dauxerre was battling anorexia, eating three apples a day and sipping diet colas in an effort to maintain her elite model status.

"No one actually told me you have to lose weight," she remembered. "But they said to me, 'In September, you're starting Fashion Week. Sizes will be 32-34 (2-4 US) and you'll have to be able to fit into them.'"

"That's when I should have left," Dauxerre said.

As Paris plays host to the spring/summer haute couture shows, Dauxerre is warning the world about how insidious a disorder anorexia really is.

In her memoir, "Never Skinny Enough: the Diary of a Top Model" ("Jamais assez maigre: Journal d'un top model") she recounts the pressures of such high-stakes dieting.

This is not the first time that a French model has sounded the alarm on the pressure to be thin on the catwalk. After writing her own book highly critical of the fashion industry, Isabelle Caro posed for a shocking anti-anorexia billboard campaign during Milan fashion week in 2007 before dying from the disease three years later at the age of 28.

For Dauxerre, besides apples and Diet Cokes, she allowed herself one small piece of fish or chicken once a week.

She then embarked on her whirlwind career, modelling for such famed houses as Alexander McQueen, Celine and Miu Miu in Paris, New York and Milan.

With her flowing brown hair and electric blue eyes, she became one of the most sought-after faces.

"No one understood," Dauxerre said, now 23. "Everybody was telling me I had a dream life, but I had never been so miserable."

In the book, she tells of life backstage where models would nibble on food in front of cameras then race to the bathroom to throw it all up once journalists were gone.

She recalls shoots where only the photographers had catering. Dauxerre was so starved and exhausted at one point she fainted in the streets of New York during one fashion week.

"The models, they're nothing, they're just clothes hangers," Dauxerre said. "In the 1980s, elite models were real people. Today, you have to fade behind the labels."

A letter by Dauxerre was read out in parliament and helped sway the vote.

The ban is only the second of its kind in the world after Israel passed similar legislation, while Spain, Italy, the UK and Denmark all have looser regulations against the practice.

Attempts at regulation have so far failed, however, in the United States and Belgium.

If the French law passes its final hurdles, models who want to work there will have to be cleared first by doctors.

Dauxerre applauds the ban, even though she feels it is "10 years too late." Such a measure, she said, would have clearly barred her from the runway.

"A doctor would have detected my weak pulse rate," she said. "He would have noticed that I was losing my hair, that I had osteoporosis, that I no longer had my period."

"Creators only want androgynous body shapes. They don't want to rejoice in a woman's body," she claimed.

"Karl Lagerfeld says that no one wants to see big women on the runway," Dauxerre added. "But there is a wide margin between what we see now and bigger-sized women."

The new measure would also fine publications upwards of €37,500 for digitally manipulating photographs of models to make them thinner.

Though critics have maintained the law will do little to curb anorexia among women, Dauxerre believes advertising plays a big role in fostering an environment where women are taught to be skinny.

"There is obviously a pathological strain to anorexia," admitted Dauxerre, who recounted how the skinnier she got, the fatter she saw herself.

She added: "But seeing images every day that confirm to you that beauty equals thinness can only bring about the condition."

Dauxerre, who now wants to be an actress and a comedian, is back to wearing a size 38 (8 US).

"The girls on the runway now would probably say that I'm lying," she said. "If they want to keep working, they can't say anything. There's a real code of silence in the industry."