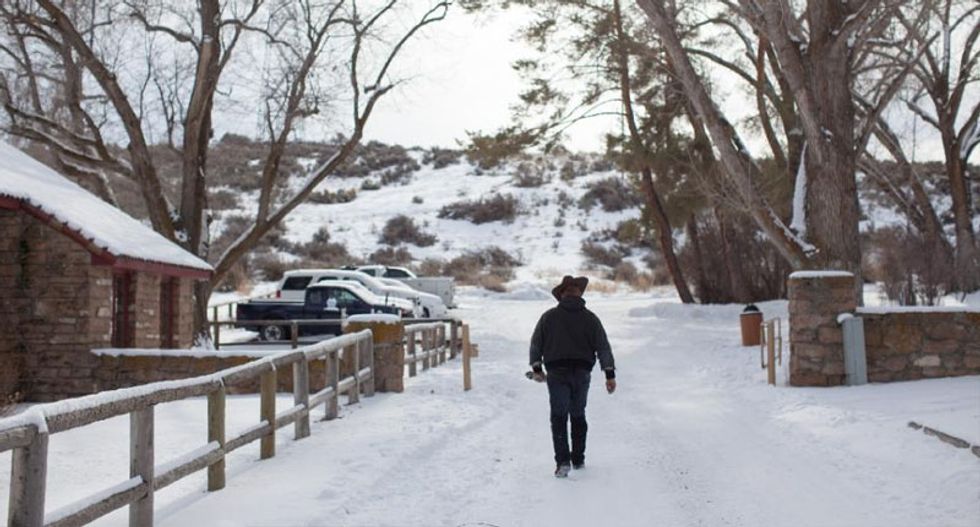 A member of an armed anti-government militia walks down a road on January 4, 2016 at the Malheur National Wildlife Refuge Headquarters near Burns, Oregon (AFP Photo/Rob Kerr)

U.S. and state officials in Oregon on Wednesday set up checkpoints around Malheur National Wildlife Refuge, where an armed group pledged to prolong its standoff with the government a day after one protester was shot and eight others were arrested.

Authorities said the new security involves a series of checkpoints along key routes into and out of the refuge, and was made out of an "abundance of caution" to protect the public and law enforcement after the confrontation.

The month-long occupation of the wildlife reserve over federal control of large tracts of the country turned violent on Tuesday after officers stopped a car carrying protest leader Ammon Bundy and others near the refuge. Activists said Robert LaVoy Finicum, a rancher who acted as a spokesman for the occupiers, was killed.

There were no details on why shooting broke out at the traffic stop. The Federal Bureau of Investigation said authorities would hold a news conference on Wednesday at 9:30 a.m. PST (1730 GMT) in Burns, a town near the refuge.

One of the remaining occupiers, Jason Patrick, told Reuters by phone they would stay until the "redress of grievances."

Authorities on Wednesday said the checkpoints will allow only ranchers who own property in the area to pass and anyone coming out of the refuge will have to show identity and have their vehicle searched.

The Malheur takeover, which started Jan. 2, was a flare-up in the so-called Sagebrush Rebellion, a decades-old conflict over federal control of millions of acres in the West. Protesters say they are defending the Constitution.

Federal officials said they had probable cause to arrest Finicum, who told NBC News earlier this month that he would rather die than be detained.

Patrick likened Finicum’s death to that of Tamir Rice, an unarmed 12-year-old black youth fatally shot by Cleveland police outside a recreation center in 2014. The officers were not charged.

"The government can kill who they want for whatever reason they want with impunity," Patrick said.

He was asked how the occupiers would respond to authorities entering the refuge but did not indicate a clear plan.

"I don't know what to tell you but if somebody saying 'peaceful resolution' comes in and points guns at me ...," Patrick said before trailing off.