FBI tells militants in Oregon: Actions are not without consequences 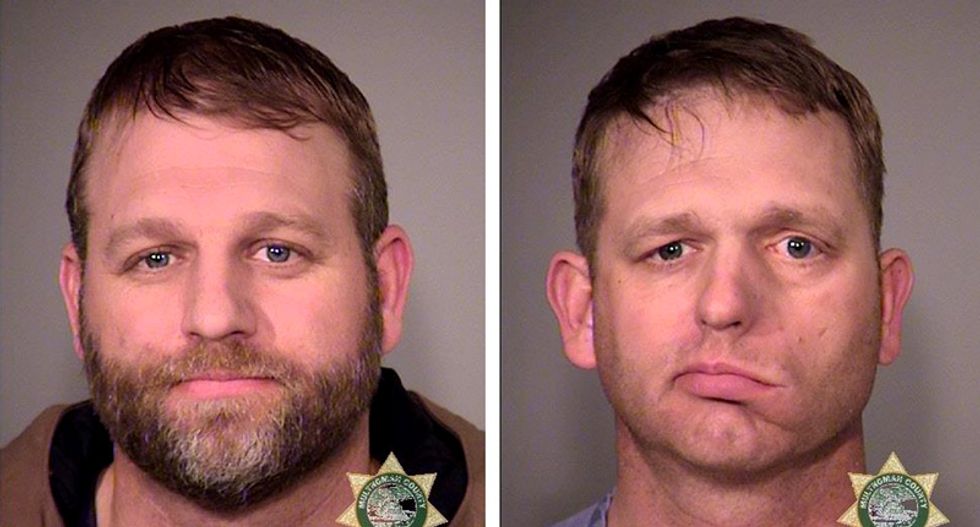 Inmates Ammon Bundy (L) and his brother Ryan Bundy are seen in a combination of police jail booking photos released by the Multnomah County Sheriff's Office in Portland, Oregon January 27, 2016. REUTERS/MCSO/Handout via Reuters

State and federal authorities pleaded with the armed men still occupying a U.S. wildlife refuge in Oregon to leave on Wednesday, a day after an attempt to resolve the standoff peacefully by detaining their leader ended with one man shot to death.

But one of the remaining occupiers of the Malheur National Wildlife Refuge in northeast Oregon told Reuters in an interview that he would not give up until the group's grievances over federal land rights were addressed.

Law enforcement surrounded the refuge and blocked off access roads on Tuesday evening, after occupation leader Ammon Bundy and his group were taken into custody at a traffic stop along Highway 395.

Citing the investigation, authorities declined to say what led to the fatal shooting of one member of Bundy's group, identified by activists as Robert LaVoy Finicum, a rancher who acted as a spokesman for the occupiers. Bundy's brother, Ryan, was wounded in the incident.

At a news conference in Burns, Oregon, on Wednesday morning Greg Bretzing, FBI special agent in charge of the agency's Portland office, said that authorities wanted a peaceful end to the situation and that the remaining occupiers were "free to leave" the refuge.

"Let me be clear: It is the actions and choices of the armed occupiers of the refuge that have lead us to where we are today," Bretzing said. "They had ample opportunity to leave the refuge peacefully and as the FBI and our partners have clearly demonstrated, actions are not without consequences."

Harney County Sheriff Dave Ward, his voice breaking, said at the news conference: "I'm disappointed that a traffic stop yesterday that was supposed to bring peaceful resolution to this ended badly. Multiple law enforcement agencies put a lot of work into putting together the best tactical plan they could, to take these guys down peacefully ...

"If it was as simple as just waiting out some folks down there to get out of some buildings, we could have waited a lot longer," Ward said. "But this has been tearing our community apart. It's time for everybody in this illegal occupation to move on. There doesn't have to be bloodshed in our community."

Ward said if the occupiers had legitimate grievances with the government, they should use the "appropriate manner" to address them.

One of the remaining occupiers at the reserve, Jason Patrick, told Reuters by phone they would stay until the "redress of grievances."

On Wednesday morning an occupier posted what appeared to be a live feed from the refuge on a YouTube page called "DefendYourBase." In it, a few occupiers, some dressed in camouflage, were seen in front of what appeared to be a heavy-duty 320D excavator, at least two of them carrying firearms.

One man spoke on a phone with a person he identified as his mother and offered her reassurance.

"If I die, I died for my country, I died a free man," he said. "That's how I want to die." The man added that his group had "food and everything for the long haul."

The Malheur takeover, which started Jan. 2 with at least a dozen armed men, was a flare-up in the so-called Sagebrush Rebellion, a decades-old conflict over federal control of millions of acres in the West.

Bundy's father, Cliven, was a key figure in a 2014 armed standoff with federal officials over unpaid grazing fees in Nevada.

The arrests and shooting have angered anti-government protesters across the country, said Mike Vanderboegh, a gun-rights activist active in self-proclaimed militia circles. "It's all I can do to keep people from going and shooting feds right now," he told Reuters.

Vanderboegh said the FBI had acted too quickly to end a situation that was already headed toward peaceful resolution.

Amid concerns that Finicum's killing could escalate into further violence, the Pacific Patriots Network, Oath Keepers and the Idaho III% - all self-styled militia groups sympathetic to the occupiers - said in a joint statement they were issuing an immediate “stand by” order to followers.

"During this time, cooler heads must prevail," the statement said. "We do not wish to inflame the current situation and will engage in open dialogue until all of the facts have been gathered."

Federal officials say they had probable cause to arrest Finicum, who told NBC News earlier this month that he would rather die than be detained.

Those arrested face federal charges of conspiracy to use force, intimidation or threats to impede federal officers from discharging their duties, the FBI said. They were scheduled to make an initial court appearance on Wednesday afternoon.