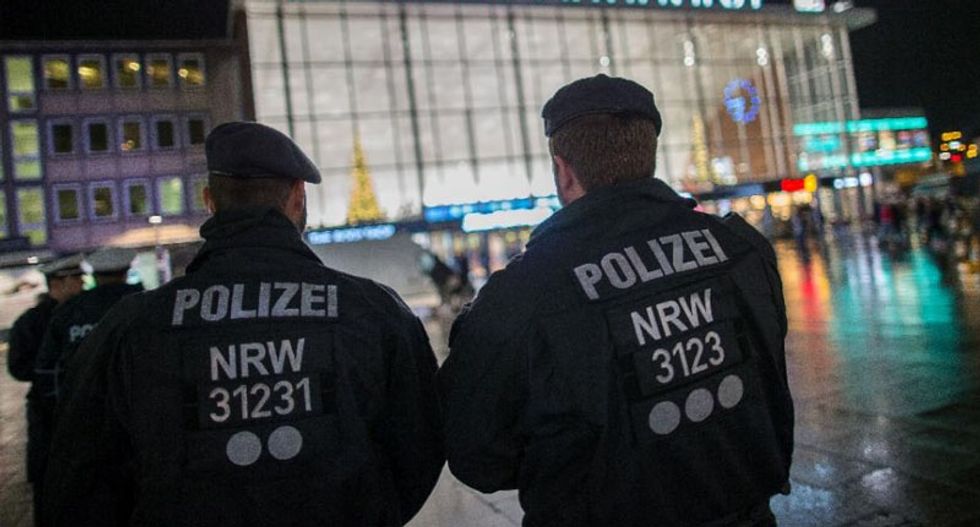 "A group of men tried to mug me -- how am I supposed to react the next time?" teenager Marie-Sophie Christ demands of a policeman outside Cologne's main railway station.

Fear and anger have gripped citizens of the Rhineland city after an unprecedented and apparently coordinated rash of robberies and sex assaults on New Year's Eve blamed on men of Arab or North African appearance.

Police vans have been parked outside the main railway station and the iconic Gothic cathedral since the full extent of the rampage in Cologne's city centre became clear.

Authorities said Thursday they had received more than 120 criminal complaints about robbery and sexual abuse including two reported rapes by perpetrators who allegedly staged orchestrated attacks on revellers in the crowds.

Sixteen suspects have been identified but no one has been charged in what police have acknowledged were chaotic scenes.

Six days on, Marie-Sophie and her friend were shopping near the same spot when they were accosted by a group of young men. The girls fled when it appeared the men were after their backpacks.

She no longer feels safe going about her business in town.

"It's a strange feeling. We pay more attention to our belongings," she said, flanked by her friend Erika Fehler.

Marie-Sophie's mother has imposed a new rule when they are in town together: they meet every hour in front of the cathedral.

"Mum was never this scared before," the high school student said.

Cologne took in more than 10,000 asylum-seekers in December alone, but Marie-Sophie is reluctant to pin the blame on them.

Erika, however, is more suspicious.

"They looked like refugees... or Albanians," she asserts, describing them as bearded and wearing dark clothes.

The high street near the railway station is notorious for pickpockets, particularly during the holiday season.

But the assaults reported during the year-end festivities shocked the nation, with German Justice Minister Heiko Maas speaking of "a new dimension of crime".

Among traders working at the station, the anger is palpable.

"There were hundreds of them and really aggressive," said a sandwich seller, who asked not to be named.

She said the people she saw on New Year's Eve were "Arabs, but not refugees -- they were really very organised".

"We still have the same problems with the same people," said the woman in her 50s, accusing police of responding too slowly and ineffectually, and saying there were "not enough" of them to keep the peace that night.

Cologne, Germany's fourth largest city with a population of nearly 600,000, is the capital of next month's Rhineland Carnival, drawing hundreds of thousands to street parties marking the start of Lent.

However, some travellers have already cancelled their reservations, a major source of income for the city, as the events of New Year's Eve hit the global headlines.

"Cologne's image has taken a hit," admitted the head of the city's tourism office, Josef Sommer, in the local daily Koelner Stadt-Anzeiger.

"We have received a lot of emails and calls from worried tourists and tour operators."

Cologne drew more than three million visitors in 2014, the last full year for which statistics were available.

"There were probably no refugees among the attackers, but of course the characterisations in the media leave a bad impression," said Petra Mueller, 45, a Cologne native.

Mueller, a secretary, refuses to give in to paranoia and said nothing would stop her from taking part in Carnival.

But distrust is what worries Ghaith Anthipan, a 20-year-old Syrian standing outside the cathedral with a friend in the freezing rain, both holding up signs in broken German reading: "What happened to women in Cologne on New Year's hurts."

Some passers-by stop to offer a few encouraging words to this young refugee, who has tears in his eyes.

Hours earlier, a handful of far-right demonstrators rallied to blame foreigners for a rise in violence, although they were booed by a much larger counterprotest of about 150 people.

"You must not rape a woman. Those who did that hurt the image of all refugees," he said.