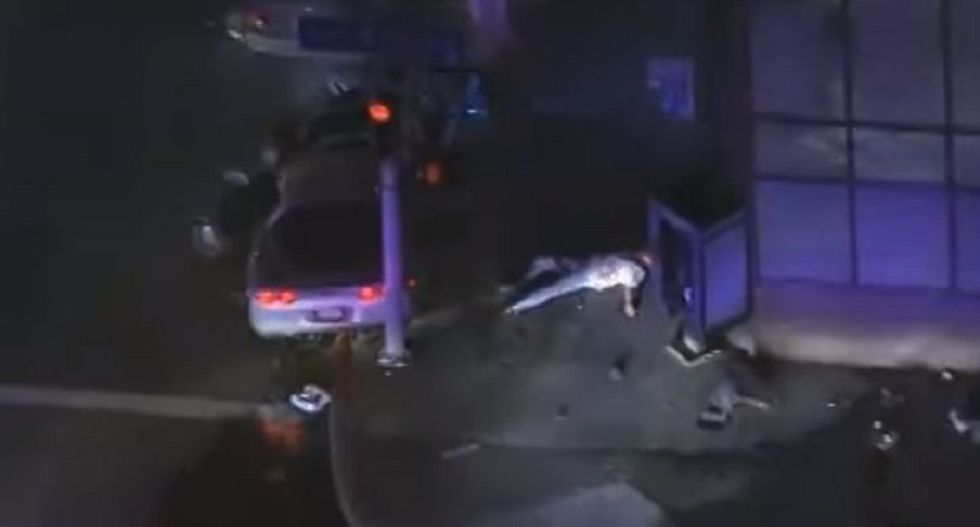 Two Los Angeles police officers who killed an unarmed, mentally ill man on live television while his 80-year-old father watched in 2013 are now suing to get their jobs back after being fired, the Los Angeles Times reports.

Michael Ayala and Leonardo Ortiz were among more than 20 officers who were involved in the 2013 pursuit led by Brian Beaird, 51, an 8-year member of the National Guard. At the end of the chase Beaird crashed his Corvette, got out and turned his back to officers. As news helicopters circled above streaming live video, the officers opened fire on Beaird, killing him.

It so happened his father, Bill Beaird, 80, was watching the pursuit on television and talking to his son on the phone, the New York Daily News reports.

"I've seen a lot, but nothing has affected me like this," he told reporters days after the killing. "But I just can't seem to get over this."

The elderly Army veteran said his son suffered from extreme paranoia and while on the phone, asked why officers were chasing him.

The video shows Beaird driving erratically and recklessly through Downtown Los Angeles in December. At one point he speeds through an intersection and violently collides with another car, which crashes. Beaird can then be seen getting out of his car and appears to be trying to flee when he suddenly crumples to the ground. Blood can be seen coming through his white shirt as he flails on the ground, then lies still.

All three were removed from duty while investigations into the incident were underway. While they were not charged, Ayala and Ortiz were fired after an internal investigation found their actions violated department policy and police chief Charlie Beck called their actions "unjustified," the Times reports.

The city settled a lawsuit with Beaird's family in the amount of $5 million. It's the largest payment in a settlement for a police shooting paid by the city in more than a decade.