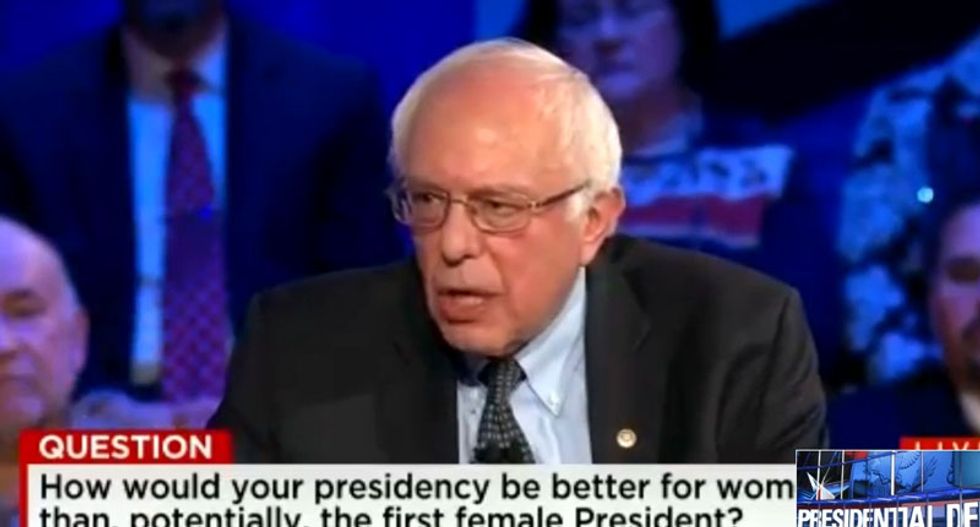 If there's one thing all of the candidates agreed on at the Iowa Democratic Town Hall on CNN Monday night it is that they are about the issues and moving the country forward, not about name calling, racism, hate, or the sideshow that has become the Republican primary. If you've followed our wrap-ups for the top-secret Democratic debates, or you've been watching these, then you know the rap the candidates give. If you're watching these things you know the message the candidates have been campaigning on, so much of what they said aren't going to be new.

What the candidates did have an opportunity to do in the town hall format Monday evening was speak on issues for longer than just a 60-second clip or a two-minute response. They were also able to respond to some of the criticisms that have been made about them and clarify some past statements people have been talking about.

Here are 8 things that you haven't heard before from the Democratic candidates:

Sanders is known for talking about his number one issue: income inequality. He ties everything from health care and social security back to the need for there to be higher taxes on the one percent, closed loopholes for corporations, etc to pay for his plans for college for everyone and Medicare for all. One thing he mentioned I haven't heard him talk about in debates before is infrastructure.

His plan is to close the foreign cash-stash-loophole that enables corporations and the one percent to avoid paying taxes by putting their money in offshore accounts, he hopes we can have a greater investment in fixing our nation's infrastructure. In the last debate, the candidates only briefly touched on the water crisis in Flint, Michigan but Sanders used it as an opportunity to talk about the crumbling infrastructure that needs to be rebuilt not just in terms of roads and bridges but in other places like Flint's pipes. As Sanders has articulated briefly before, the plan will create 13 million jobs.

Every once in a while, the producers like to throw a bone to a young person and let us ask a question. If you read the last piece we did I had a total nerdgasm when someone asked a question about issues that matter to young people. My excitement was quickly dashed when Clinton talked only about college affordability. Not that the issue isn't important, but we are more than a single issue demo. Monday, student Jenna Bishop asked specifically about issues other than college.

O'Malley used the opportunity to talk about climate change. He's discussed his 100% renewable plan before but in the questions that followed he also addressed young voters as part of those solutions. When Arnold Woods asked about veterans and the draft, O'Malley talked about how he would like for there to be a form of service other than military where people can serve their country. It could be anything but he suggested public health or the environmental restoration projects he hopes we begin. Youth would be eligible for funding for higher education just like military so it would "help cut the cost of college and tap the goodness in the next generation."

When Brian Carlson asked about LGBT workplace discriminations O'Malley folded that into our nation's youth as well. He said in every generation we move something forward to become a "more perfect nation" and in Maryland their LGBT campaigns were about treating everyone's child with dignity and respect. He also addressed the importance of bringing more young people into farming to strengthen rural communities. It's rare for candidates to have such a well-rounded understanding about the Millennial generation.

In case you were under a rock on Monday, President Obama did an interview where he gave major props to Clinton and kinda talked a bit of smack on Sanders. This was Clinton's first opportunity to respond since the interview. She said she was touched and gratified and that they've had a great working relationship and become good friends over the years. What was surprising in Obama's interview was that he said he regretted some of the things his campaign did in 2008 in the battle against Clinton. She said that she was truly thankful that Obama said it and that she understands "you get into the arena and you'll get pummeled and pushed and criticized. I wouldn't be doing this if it wasn't necessary."

President Obama also called Sanders the shiny new candidate that people aren't accustomed to seeing on the political stage. "How did Bernie happen?" CNN's Andrew Cuomo asked. "It's a great country, despite what one of the republican candidates says," Clinton said before talking about the positive race Democrats have run.

4. Bernie Sanders on the establishment:

In the past week, The Human Rights Campaign and Planned Parenthood have both endorsed Hillary Clinton. Sanders responded to the endorsements in two press releases that he wasn't surprised because they were organizations that belonged to "the political establishment." Drake University student, Alexis Kulash, asked what he meant by "the establishment" and if he supported Planned Parenthood.

"What I said on a television program, and I did not say it well, is that sometimes the base of an organization looks at the world a little bit differently than the leadership. So if you have 100 percent Planned Parenthood voting record, 100 percent pro-choice voting record, there are people who are asking, why is the leadership not either supporting Bernie Sanders or why are they, you know, opposing him?"

Sanders said his criticism was more about the "endorsement policies" of these Washington, DC organizations -- not the amazing work these groups do to help so many.

5. Martin O'Malley's props to his fellow candidates and trashes Trump:

When asked to contrast himself with the other candidates, O'Malley talked about his story growing up in a Democratic family that took pride in making the country stronger. He said he does believe in fair market American capitalism and economic freedom from monopoly, but he said he absolutely agrees with Sanders that we have a substantial problem with wealth concentration at the top. He said we "need a rebalancing of the common good."

"We are far better than the fascist rhetoric of Donald Trump," O'Malley continued. "It is not a barbwire fence, it is the Statue of Liberty."

6. Hillary Clinton answers why young people are supporting Sanders over her:

In the last debate, Clinton brushed off questions about the youth support that Sanders has over Clinton, but in this town hall, she had an answer. When asked by Sanders supporter Taylor Gipple about the youth support Clinton touted her support among high school students she'd met with earlier that day and young women supporting her campaign.

Beyond that, Clinton said that young people are new to politics and she's old to politics. "But if you're new to politics, if it's the first time you really paid attention, you go, 'oh my gosh, look at all of this.'  And you have to say to yourself, why are they throwing all of that? Well, I'll tell you why.  Because I've been on the front lines of change and progress since I was your age."

Every debate asks a fluff question and thus far they have been horrific. This time, we actually got some questions that weren't embarrassing for the candidates and the moderators. An incredibly touching question from Cuomo came when he mentioned an interview Sanders' brother did earlier that day on CNN. His brother got a little emotional talking about the pride their parents would feel.

"They wouldn't believe it," Sanders said. " I mean, we grew up - my dad came from Poland at the age of 17 without a nickel in his pocket, couldn't speak English and he never made a whole lot of money. And my brother and I and mom and dad grew up in a three-and-a-half-room rent-controlled apartment in Brooklyn, New York.  And we never had a whole lot of money."

"And if you ask me," Sanders continued. "This would be so unimaginable, the fact that I'm a United States senator would've been beyond really anything that they would have thought possible.  The fact that I am running for president of the United States, you know I do think about it and you know think they're very proud.  But it's certainly something that I don't think they ever believed would've happened."

In a shocking twist, Clinton gave an unbelievable answer to a total fluff question as well. When asked who the best president she thinks we've ever had, Clinton didn't say her husband or her former boss, President Obama, she chose Abraham Lincoln and spoke eloquently about the very essence of the man and his legacy. "When I think about his challenges, they paled in comparison to anything we have faced or can imagine.  You know, more Americans died in the Civil War than, you know, the wars of the 20th Century put together.

"So here was a man who was a real politician.  I mean, he was a great statesman, but he also understood politics.  And he had to work to put together, you know, the support he needed to be able to hold the country together during the war. And while he was prosecuting that war to keep the Union together, he was building America, which I found just an astonishing part of his legacy.  The transcontinental rail system, land-grant colleges, he was thinking about the future while in the middle of trying to decide which general he can trust to try to finish the war. And yet, he kept his eye on the future and he also tried to keep summoning up the better angels of our nature.  You know, he was willing to reconcile and forgive...

"Our challenges are nothing like what he faced," Clinton continued. "But let's think ourselves about not only what we have to do right now, especially to get the income rising in America, especially to make college affordable, do something about student debt, keep health care growing until we get 100 percent coverage and so much else.

"But let's also think about how we do try to summon up those better angels, and to treat each other, even when we disagree, fundamentally disagree, treat each other with more respect, and agree to disagree more civilly, and try to be inspired by, I think, the greatest of our presidents."

Iowans will have a tough choice in less than a week. If only this was the end, but it's only the beginning of the end.