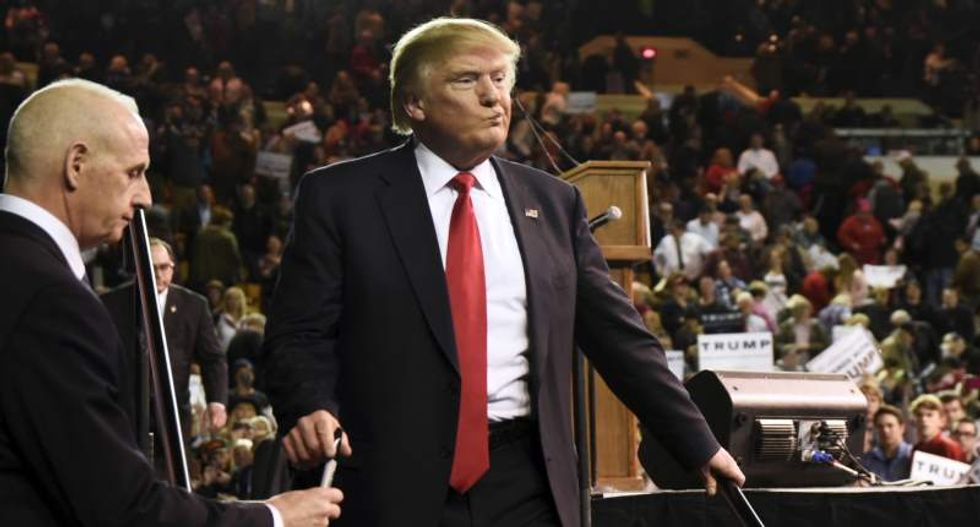 The National Review's editorial calling for conservatives to unite against Donald Trump frets at one point about the real estate mogul's rhetoric. But some of the contributors who sent in essays for the special issue would likely fail if the magazine applied the same standards.

"Trump has gotten far in the GOP race on a brash manner, buffed over decades in New York tabloid culture," the editorial states. "His refusal to back down from any gaffe, no matter how grotesque, suggests a healthy impertinence in the face of postmodern PC (although the insults he hurls at anyone who crosses him also speak to a pettiness and lack of basic civility)."

However, the same "lack of basic civility" could also be pointed out in these people the magazine enlisted to present themselves as more sensible alternatives to the Republican front-runner:

The Weekly Standard founder and Twitter punching bag -- who tried to make the case last April for "everyday American" Dick Cheney as a 2016 candidate -- said in his essay for the Review that conservatives should "seek guidance from those we admire."

Kristol does not specify whether that argument was on his mind when he argued that people should not go "hysterical" in December 2014 when racist remarks by then-pro basketball owner Donald Sterling were brought to light. Or when he pushed the idea two months earlier that Republicans could score points by blaming President Barack Obama for Ebola outbreaks in African countries.

Beck was among the first high-profile conservatives to express skepticism of Trump's Republican bonafides, going so far as to accuse him of being a vehicle for "big business" to discredit Tea Partiers.

In his Review essay, the Blaze founder revisits those arguments. But it should be noted that the special anti-Trump issue was released hours after Beck suggested that both Trump and Obama could be "psychopaths."

And that's without getting into Beck's accusations that the president is "a racist," or his defense of anti-LGBT legislation, or any number of inflammatory statements he has made throughout his career.

The former film critic took aim at Trump's stated goal to "build a wall" at the US-Mexico border and deporting 11 million undocumented immigrants from the former country. He also accused the businessman of portraying "the living, breathing, bellowing personification of all the nasty characteristics Democrats routinely ascribe to Republicans" on the campaign trail.

Of course, Medved also insisted in March 2014 that no state had ever instituted a ban on same-sex marriages, calling such a notion "a liberal lie." As Media Matters pointed out, 30 states had such laws in place at the time in their state constitutions.

He did not mention how "cool" it was in February 2014 when it was revealed that newspaper columns and books published under his name were actually written by one of his employees, Tim Graham.

Last year, he accused "the radical left" of instituting a shutdown against discerning thought, bemoaning in a speech at the Conservative Political Action Conference that "censorship is everywhere" because opposition to both homophobia and the use of an anti-Native American slur to describe Washington D.C's football team has become more widespread.

The RedState founder had his own dust-up with Trump last August, when he disinvited the entrepreneur from his site's event for saying Kelly had "blood coming out of her wherever."

But even fellow conservative Neil Cavuto pointed out at the time that Erickson had his own history of sexist "needling." Kelly herself slammed Erickson in 2013 when he argued that mothers who chose to work rather than stay at home were doing a disservice to their children.

The Townhall editor accuses Trump of making a living "out of preying on and bullying society’s most vulnerable, with the help of government."

But less than a month ago, Pavlich dismissed the idea of white privilege, calling the idea itself racist and declaring that "confronting [her] white privilege is going to the tanning salon." Last May, she also attempted to blame courses on the subject in Baltimore school for the tensions that spurred rioting in the city following the death of Freddie Gray.

Four months later, she went even further and accused the Black Lives Matter movement of promoting "the execution of police officers."