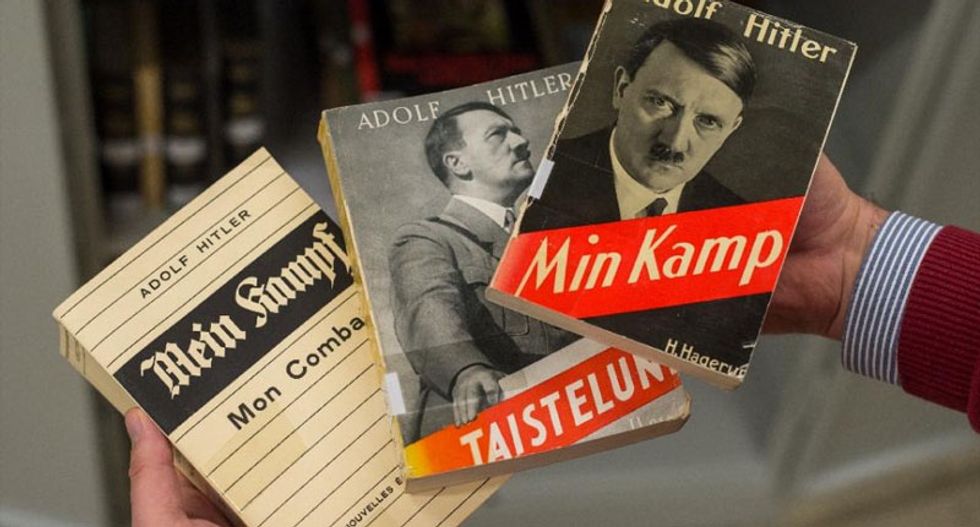 A man holds a French (L), a Finnish (C) and a Danish (R) edition of Adolf Hitler's "Mein Kampf" (My Struggle) at the Institute for Contemporary History in Munich (AFP Photo/Matthias Balk)

New copies of Hitler's "Mein Kampf" hit bookstores in Germany Friday for the first time since World War II, unsettling some Jewish community leaders, as the copyright of the anti-Semitic manifesto expires.

Bavaria was handed the copyright of the book in 1945, when the Allies gave it control of the main Nazi publishing house following Hitler's defeat.

For 70 years, it refused to allow the inflammatory tract to be republished out of respect for victims of the Nazis and to prevent incitement of hatred.

But "Mein Kampf" -- which means "My Struggle" -- fell into the public domain on January 1.

Copies of an annotated version running to 2,000 pages prepared by German researchers went on sale on Friday, with the authors arguing that their version would serve to demystify the notorious rant, which in any case can be found easily on the Internet.

The version by the Institute of Contemporary History of Munich (IFZ) has been in the works since 2009 and aims to "deconstruct and put into context Hitler's writing".

Retailing at 59 euros ($65), the book looks at key historical questions, the institute said, including: "How were his theses conceived? What objectives did he have? And most important: which counterarguments do we have, given our knowledge today of the countless claims, lies and assertions of Hitler?"

Christian Hartmann, who led the editorial team for the annotated version said the version could show a wider public how "aggressive the hate sermon" was.

Education Minister Johanna Wanka has argued that the annotated text should be introduced to all classrooms across Germany, saying it would serve to ensure that "Hitler's comments do not remain unchallenged".

"Pupils will have questions and it is only right that these can be addressed in classes," she said.

But some among the Jewish community questioned whether it was necessary to propagate the incendiary text again.

Partly autobiographical, "Mein Kampf" outlines Hitler's ideology that formed the basis for Nazism. He wrote it in 1924 while he was imprisoned in Bavaria for treason after his failed Beer Hall Putsch.

The book set out two ideas that he put into practice as Germany's leader going into World War II: annexing neighbouring countries to gain "Lebensraum", or "living space", for Germans, and his hatred of Jews, which led to the Holocaust.

Some 12.4 million copies were published in Germany until 1945, some of which can be found in academic libraries.

Newspaper Tagesspiegel said the reprint serves as a historical documentation of the Nazi atrocities when "witnesses, victims or perpetrators are no longer around". "That cannot be stopped," it added.

The Berliner Zeitung noted that the tract should have been banned for sedition during the Nazi era, and not now.

"Today, the book must be made available precisely for this reason," it said, adding that it serves as an "arsenal" against anti-Semitism.

But opinion is divided among the Jewish community, with some leaders welcoming the new version and others slamming the reprints.

The President of the Germany's Jewish Council, Josef Schuster, told broadcaster NDR that he welcomed the publication of the annotated version as it would serve to "undo the myth of this book" and show how "completely wrong and ridiculous Hitler's theories and theses were".

Charlotte Knobloch, leader of the Jewish community in Munich, however said she could not imagine seeing "Mein Kampf" in shop windows.

Ronald Lauder, president of the World Jewish Congress, told AFP that not only would "Holocaust survivors be offended by the sale of the anti-Semitic work in bookstores again", but that he also failed to see a need for a critical edition.

"Unlike other works that truly deserve to be republished as annotated editions, 'Mein Kampf' does not," he said, arguing that academics and historians already have easy access to the text.

And even though it should be studied and German students taught about the devastating impact it had, Lauder said "the idea that to do so requires an annotated edition with thousands of pages of text is nonsense."

"Now, it would be best to leave 'Mein Kampf' where it belongs: the poison cabinet of history," he said.