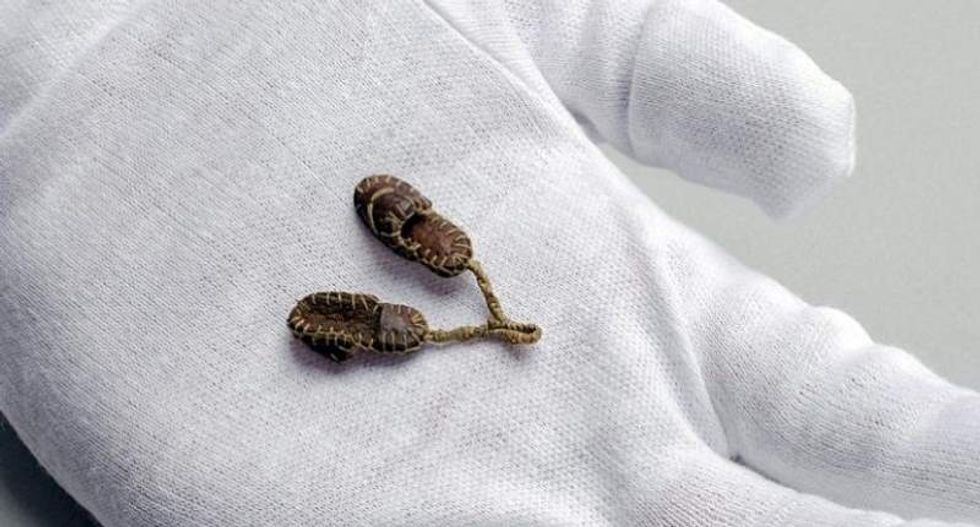 This picture released by the Auschwitz-Birkenau museum in Oswiecim on Jan. 20, 2016 shows a donation by former Auschwitz prisoner Batszewa Dagan -- a pair of tiny shoes made in the camp by her fellow inmate (Agence France-Presse)

Ninety-year-old Auschwitz survivor Batszewa Dagan on Wednesday said she had donated a pair of miniature shoes that helped her live through the Holocaust to the museum at the site of the former Nazi German death camp.

The Polish-born Israeli received the tiny, handmade good luck charm from a fellow inmate at the Auschwitz-Birkenau camp in southern Poland during World War II, when she was just a teenager.

"(The woman) was sad and she was talking about her daughter, how she missed her, and was thinking if she would ever leave this place," Dagan said in a statement released on the museum website.

"And she made me a surprise. She made these tiny shoes for me. She said, 'Let them carry you to freedom'," she added of the slippers barely a centimetre (half an inch) in length.

The woman, whose name and fate are lost to history, was a German Jew who had been deported to Auschwitz while her policeman husband and daughter stayed behind.

"And how did she make them? She found a piece of thin leather, somebody gave her a needle and she also had some thread... And she made these shoes," Dagan added.

The poet and author of numerous publications used to teach children and teenagers about the Holocaust also spent time at other Nazi German camps before moving to Israel after the war.

One million European Jews died between 1940 and 1945 at the Auschwitz camp in the southern city of Oswiecim.

More than 100,000 others including non-Jewish Poles, Roma, Soviet prisoners of war and anti-Nazi resistance fighters also died there, according to the museum.

A record 1.72 million people visited the site in 2015, 70 years after the Soviets liberated the death camp.