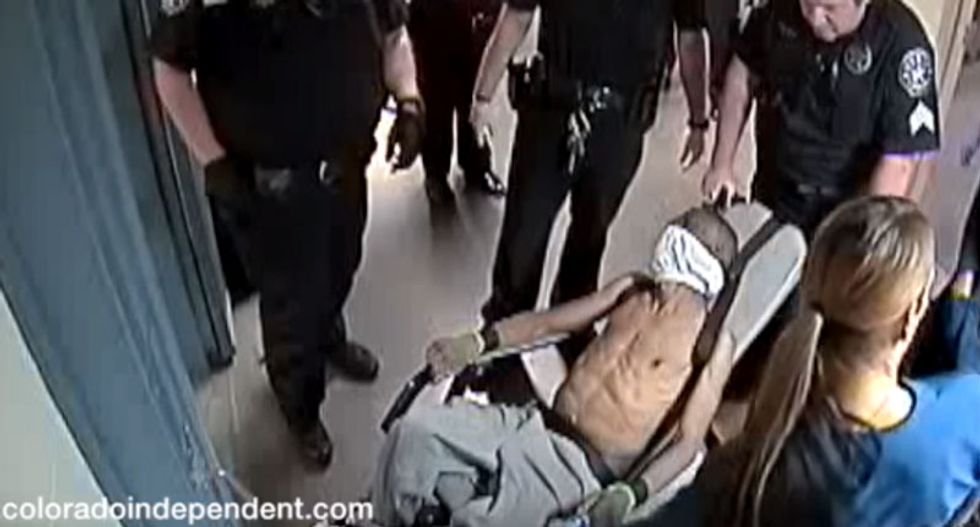 New details about Michael Lee Marshall’s final minutes of consciousness can be discerned from videotapes that, after a hunger strike and a lawsuit, the city of Denver released earlier today.

The tapes unfold in three parts. They were shot from two different overhead cameras in Denver’s jail. They’re without audio — 44 minutes of silence. Here’s what happened between 6:28 and 7:12 p.m. on Nov. 11th in the jail’s 4th floor “secure sallyport.”

Marshall walked down the hall shirtless, his laundry in hand. He was 50 years old, 112 lbs. and homeless, a paranoid schizophrenic who had been arrested a few days earlier on a trespassing charge at a Colfax Avenue motel where he sometimes stayed. He was being held on a $100 bond.

After Marshall tried putting his laundry on a shelf and then on a cart in the hall, some papers fell off the cart onto the floor. He walked down the hall, away from the camera. A sheriff’s deputy walked by the fallen papers and toward Marshall. Marshall headed back toward the camera, dragging on the floor what looks like a blanket. Out of it fell several small, unidentifiable items, within full sight of the deputy.

Marshall paced back and forth, stopped to pick something up, then paced more. He kept dragging his blanket and then dropped what looks like a shirt. He sat on a bench, and several more small items fell out of the blanket he was clutching. He bent down to gather them from the floor.

A tall, stocky sheriff’s deputy stepped into the frame and stood watching Marshall, who collected his belongings and held them tightly to his chest.

A second deputy walked by, and a third approached so that two deputies were standing on each side of where Marshall was seated. Both were notably larger than he And both stood for a while, holding their belts, watching him.

Marshall adjusted his sagging pants, then stood up, blanket in hand and tried walking between one of the deputies and the wall in an attempt to get past him.

A view of Marshall himself is hidden from the camera until the deputies dragged him a bit more into the frame. There’s a quick glimpse of his leg, unmoving. Several deputies leaned and stood over him for several minutes. At this point, it’s unclear from the video if they were restraining him, giving him medical care, or both. During this time, a few lights seem to have flashed out of the camera’s view. A few minutes later, Marshall’s foot moves and a deputy leans in to hold it still.

At one point, 13 minutes into the video, at least five uniformed officers and three staffers who appear to be medical personnel were leaning over Marshall. The medics then stepped away, leaving five deputies still restraining Marshall on the floor. They appear to have used some force because the deputy harnessing Marshall’s foot — or feet — kept wiping sweat from his brow.

Seventeen minutes into the video, a deputy approached from down the hall with what looks like the cloth “spit hood” that, according to the autopsy, was placed over Marshall’s mouth. About eighteen minutes in, the crew of deputies lifted Marshall into a restraining chair and out of view of the first camera.

The second camera shows that deputies spent about three minutes strapping Marshall’s seemingly limp shoulders and arms into the chair while as many as ten uniformed officers surrounded him. Marshall sat lifeless in the chair for about five minutes while the deputies, for the most part, stood around and watched.

Finally, a deputy shook Marshall’s chest in what looked like an attempt to wake him. A medic apparently found Marshall had no pulse. Deputies started unstrapping Marshall from the chair — slowly at first and then faster, as if for the first time deeming it a medical emergency.

The medics removed the spit hood from Marshall’s face and wiped what likely was the vomit his autopsy report indicates he choked on. He was lowered to the floor. A deputy performed CPR on Marshall on and off for about 20 minutes until he was lifted up, still limp. He was taken out of the camera’s view and the video ends.

What we know, beyond the videotape, is that Marshall was taken to Denver Health Medical Center, where he was brain dead for nine days before his family ended life support on November 20. What we also know is that Denver’s coroner earlier this month deemed his death a homicide.

Denver District Attorney Mitch Morrissey’s office announced today that it’s not pressing criminal charges in the case, ending the criminal investigation the city cited in refusing for two months to release the videotapes.

Their release today puts an end to a 10-day hunger strike by members of Marshall’s family, several black pastors and other clergy, members of Denver’s faith community and civil rights activists. Strikers told The Independent this evening that although their hunger for food has ended, their hunger for justice in Marshall’s case has just begun.

His family is considering a civil rights lawsuit against the city. Their legal team is the same that represented the family of Marvin Booker, another mentally ill homeless man who was killed in 2010 when several sheriff’s deputies restrained him — much like Marshall — in the city jail. As with the deputies in Marshall’s case, none of those who killed Booker were criminally charged. Still, federal jurors found them to have been liable for Booker’s death and awarded Booker’s family an unprecedented $6 million jury award.

Despite today’s release of the Marshall videotapes — over which The Colorado Independent sued Mayor Michael Hancock’s administration yesterday — many questions about the case remain.

It’s unclear why deputies restrained Marshall on the ground for so long and then, even though he seemed to present no physical threat, strapped his limp body into a restraint chair and stood around for several minutes rather than rushing him to the hospital.

Also in question is whether those deputies will keep their jobs under an administration that has promised to set straight its wayward Sheriff’s Department, yet seemingly has failed to enact meaningful reforms.