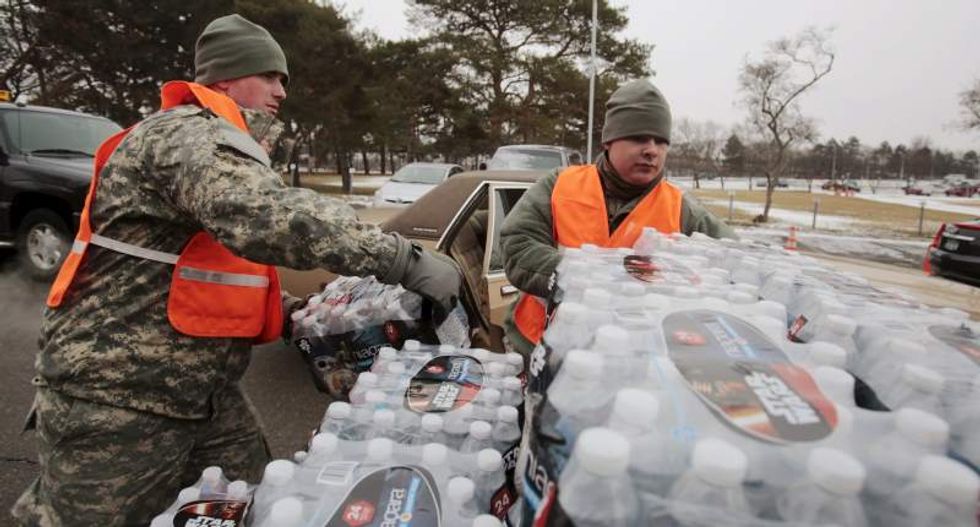 Michigan National Guard members help to distribute water to a line of residents in their cars in Flint, Michigan on Jan. 21, 2016. (Reuters/Rebecca Cook)

Michigan Governor Rick Snyder and other officials will be called to testify next month to a congressional panel about the crisis over lead-contaminated water in the city of Flint, a congressional office said on Thursday.

U.S. Representative Brenda Lawrence, a Democrat, requested the Feb. 3 hearing of the House of Representatives Oversight and Government Reform Committee last week, said her communications director, Tracy Manzer. The invitation will be specifically for the governor and he cannot send a representative on his behalf, Manzer said.

Susan Hedman, administrator for the Environmental Protection Agency's Region 5 office in Chicago, and Dan Wyant, former director of Michigan's Department of Environmental Quality, are among the other invitees. Wyant resigned in December over the growing crisis in Flint.

Flint, a financially strapped city north of Detroit, switched water supplies in 2014 to save money. Complaints about the water began within a month of the change, but officials did not take steps to remedy the situation until October 2015 after tests showed elevated levels of lead in some tap water in the city and in some children.

"The purpose of the hearing is to identify precisely what went wrong in the process and to ensure that those who were responsible are to be held accountable and that this never happens again," Manzer said.

Snyder, a Republican, has rejected calls from critics for his resignation over the crisis. He asked the Michigan state legislature this week to approve $28 million to assist Flint and said there would be additional funding requests. The Michigan House approved the funding unanimously on Wednesday and the bill was in the Senate on Thursday.

The U.S. House committee can subpoena people to appear before it if they do not respond to invitations.

(Reporting by Fiona Ortiz in Chicago and Timothy Gardner in Washington; Editing by Frances Kerry)