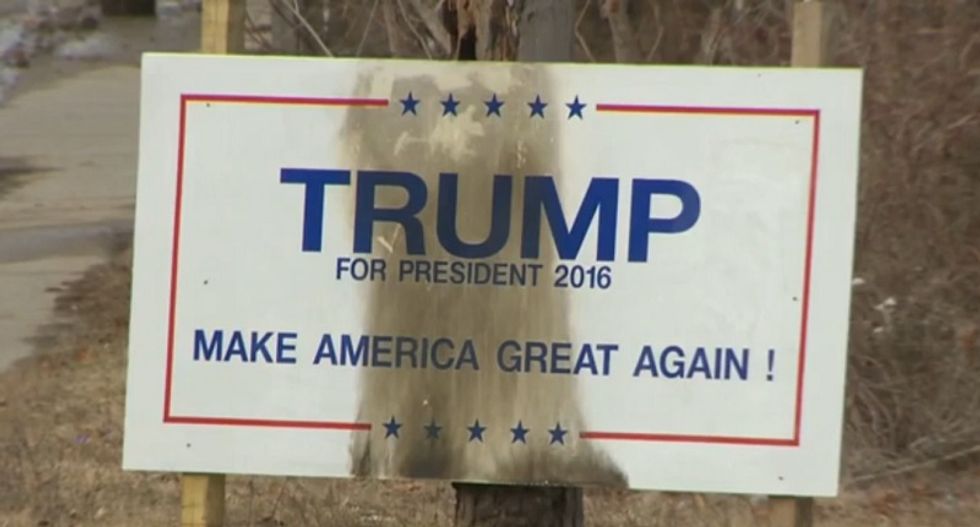 A man who put what he thought was an indestructible campaign poster in his yard voicing his support for Donald Trump found it damaged after a vandal tried to set it on fire, WCVB reports.

The sign was placed in front of a business belonging to Paul Gratta, who told the station he has been putting political posters out for years. But this year, emotions seem to be running higher than ever before.

"Once in a while, someone will knock a sign down, but not destruction like this," he told WCVB.

The result left a gray swath on the sign and a tree burned, but the sign was made of flame-resistant materials.

"I mean lighting a sign on fire, I don't think that's happened for a while in Massachusetts, probably," he said. "If it gets that bad, we're all in trouble... If you want to vote against Trump, go to the election and vote against him. But please leave the signs alone."

A rag with what is possibly accelerant was left at the scene and police are investigating the incident.

The sign cost Gratta $200. Last week, someone spray painted the word "Nope" on it and knocked it over.

Trump is a controversial candidate and his rallies have been riddled with protests.

The GOP front runner started his campaign off by insulting Mexican people and later said he wanted to ban all Muslims from entering the United States. He has since locked horns with Fox News, particularly popular host and debate moderator Megyn Kelly and has dropped out of the debate on Thursday night.