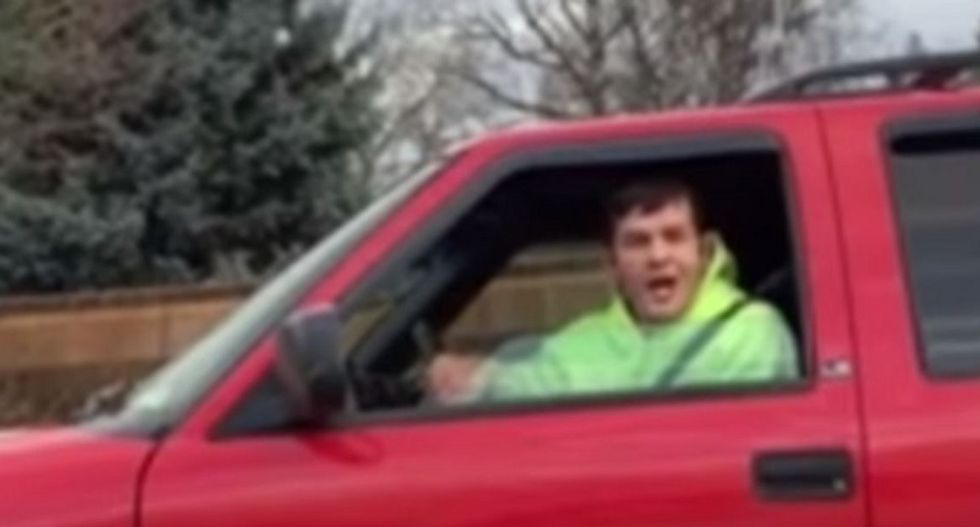 A man caught on video shouting racist slurs while driving alongside an Oregonian woman of Jordanian descent has been fired from his job as a result.

The video, posted this week by Susan Khalaf, shows a man in a red SUV driving alongside her and shouting the racial slur, "wetb*ck" at her over and over again, according to local news station KGW. Khalaf said she was driving on the Tualatin-Valley Highway in western Oregon when the man, who was behind her, started shouting at her.

Khalaf said he then pulled up alongside her, and that's when she started filming.

She told KGW she wanted to see what he would do when she corrected him.

"I wanted to see his reaction, because if he's this racially infuriated by Hispanics, I'm curious to see what his reaction would be with all the -- everything going around about Arabs now," she told the station.

Khalaf, who was born in California, said she posted the video to expose the man. And while police told KGW that he didn't commit a crime, they still plan to speak to him about the incident.

As a result of the widely-shared video, Wolcott Plumbing fired the man, who had worked as a plumber for the company.

"First of all, this is a very upsetting situation. Under no circumstances do I personally nor do we as a company condone the use of abusive language of any kind to anyone." wrote a company representative to KGW. "Upon further investigation today, I learned and confirmed it was one of my employees in the video. This employee was immediately terminated."

Watch video of the encounter, as posted to YouTube, here: