Iowa Republican race boils down to Trump vs Cruz 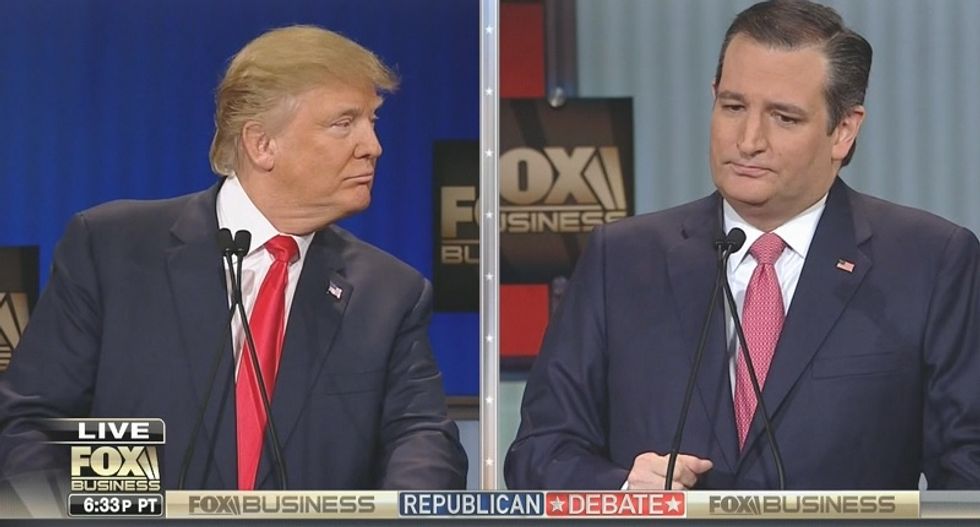 In this corner, Donald Trump. In the other, Ted Cruz.

The brash billionaire and the US Senate conservative have taken off the gloves in Iowa, where they have emerged as the top contenders in the debut Republican presidential nominating contest.

Candidates face crunch time February 1 when residents of the heartland state cast the first votes in the 2016 race, and it is looking increasingly like a two-person, bare-knuckles affair.

"It's a Trump and Cruz contest for first in the Iowa caucuses at this point," Republican strategist Ryan Williams of FP1 Strategies told AFP.

"It's a real dog fight... and the flame war between Trump and Cruz seems to have erupted in the last week as they realize that they're trying to peel off the same voters from each other."

Real estate tycoon Trump, once in the thick of a Cruz "bromance," now calls his chief rival "a nasty guy" and a hypocrite for slamming New York values while taking money from donors in the Big Apple.

Cruz, who has barnstormed the frigid, snow-driven state in recent weeks, is ramping up his own attacks, criticizing Trump for praising President Barack Obama's stimulus package, once supporting a national health care system, and for donating to Democrats.

"Donald seems very rattled right now," Cruz told The Kuhner Report radio talk show Monday. "Every time his poll numbers go down, he gets angrier and angrier and he lashes out."

The GOP field is deep this year, with 12 candidates still in the race. But only Trump and Cruz are capturing the imagination of substantial numbers of voters in the heartland state, a disproportionately large percentage of whom are evangelical Christians.

Trump is pulling 28 percent support, just one point ahead of Cruz, according to a RealClearPolitics average of recent major Iowa polls.

Marco Rubio? The charismatic young senator from Florida has performed admirably in several debates and is seen by some as navigating the middle lane between far-right conservatives and the party's establishment.

But he is a distant third in Iowa at less than 12 percent.

Retired neurosurgeon Ben Carson, a onetime leader in Iowa, has slipped to fourth, at 8.7 percent. None of the other candidates, including more mainstream former Florida governor Jeb Bush and New Jersey Governor Chris Christie, is consistently polling above five percent.

But a hurdle was dumped in Cruz's path Tuesday, when Iowa's popular Governor Terry Branstad openly expressed opposition to a Cruz victory.

"I believe it would be a big mistake for Iowa to support him," Branstad told a renewable fuels summit in Altoona.

Cruz opposes the Renewable Fuel Standard, which sets the amount of ethanol and renewable fuel that must be blended into gasoline. Branstad supports it.

Winning Iowa by no means assures the nomination. Just ask former Arkansas governor Mike Huckabee, who romped to victory in the Hawkeye State in 2008 only to lose the Republican race to John McCain.

But it provides a critical psychological lift for the winner going into the next contest, in New Hampshire on February 9.

With the nomination on the line, the political knives have come out.

"Everybody hates Ted," Trump told Fox on Monday, alluding to how Cruz has alienated many in his own party in Washington.

Trump unleashed a barrage of anti-Cruz tweets on Monday and Tuesday, warning once again of Cruz's potential presidential ineligibility because he was born in Canada and the legal issues surrounding natural born citizenship have not been settled.

Cruz sharpened his tone against Trump Monday night in New Hampshire, where he reminded rally attendees that Trump had been absent in the conversation when Cruz sought to block an immigration overhaul.

"I would suggest as voters," the New York Times quoted Cruz as saying, "you have reason to doubt the credibility of the promises of a political candidate who discovers the issue after he announces for president."