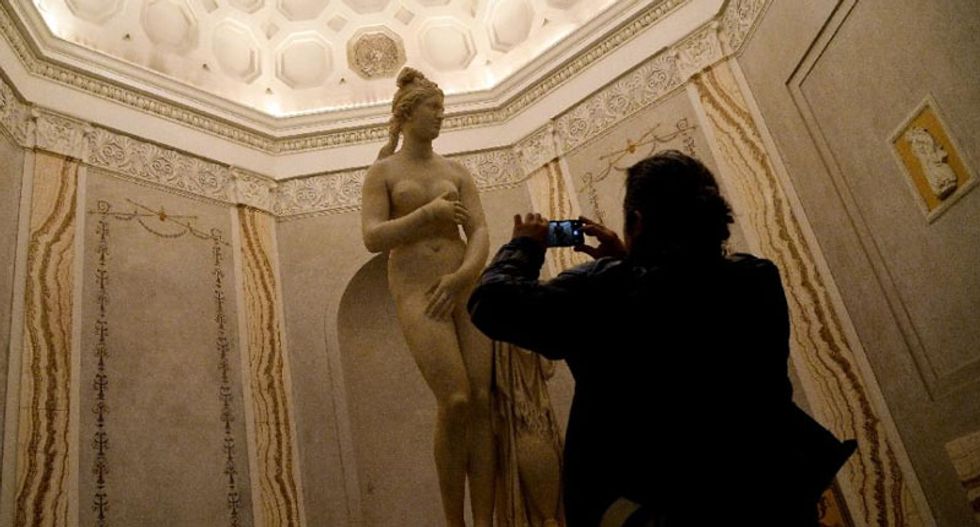 Iranian President Hassan Rouhani said Wednesday he had not asked his Italian hosts to cover up classical nude statues in a Rome museum he visited with Prime Minister Matteo Renzi.

A smiling Rouhani told reporters he had "no contact on the subject" with Italian authorities.

"I know that the Italians are very hospitable, a people who seek to make their guests' visits as pleasant as possible and I thank them for that," he added.

Rouhani and Renzi made speeches in Rome's Capitoline Museum on Tuesday, with a huge statue of Roman emperor Marcus Aurelius on a horse featuring prominently in many of the photographs of the event.

But nude statues, including a Venus dating from the second century BC, had all been covered up in temporary wooden cartons, removing the risk of them creeping into any of the shots -- or catching Rouhani's eye.

He insisted that neither Renzi nor himself had been made aware of the decision in advance.

The Italian media on Wednesday railed against an "excess of zeal" and placed the blame on the office in charge of protocol during visits by foreign dignitaries.

Sources in Rome's city hall, which manages the museum, assured the press that the municipality had played no role in the decision.

The museum cover-up was not the only step taken in Italy to ensure the Iranian visit passed off smoothly.

As Rouhani refuses to attend official meals at which any alcohol is available, wine was strictly off the menu at both lunch with President Sergio Mattarella and dinner with Renzi.

According to media reports, France has baulked at making a similar placatory gesture, leaving diplomats preparing for Rouhani's visit to Paris from Wednesday with a major protocol headache.

Italy's anti-immigration Northern League denounced what it called "submission to a culture which we don't share".