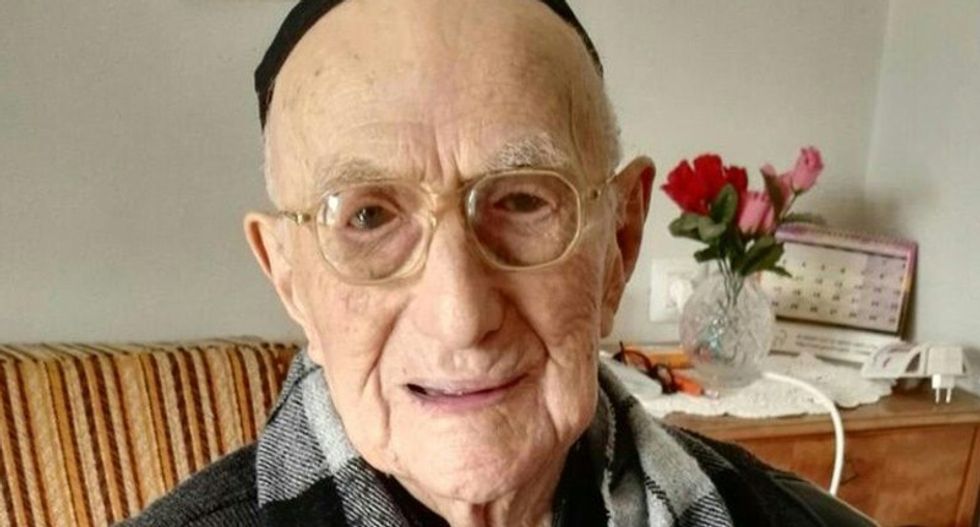 A picture taken on January 21, 2016, shows Yisrael Kristal sitting in his home in the Israeli city of Haifa (AFP)

An Israeli Holocaust survivor may be the world's oldest man at 112, Guinness World Records said Thursday, providing he can find the documents to prove it.

His family say Yisrael Kristal was born in Poland on September 15, 1903, three months before the Wright brothers took the first aeroplane flight.

He lived in the country until the Nazi occupation during World War II, when he was eventually sent to the Auschwitz death camp.

Robert Young, senior consultant for gerontology at Guinness World Records, confirmed that if proven, he would become the oldest man currently on record.

To do so, however, Kristal would have to produce documents from the early years of his life. Currently, the family have said the oldest document they have is from his wedding aged 25.

"We have standard rules and it would be unfair on other people if we bent the rules," Young told AFP, while expressing sympathy for Kristal's circumstances.

The best hope for finding the missing proof may be in the town of Zarnov where he was born.

The family later moved to Lodz, where Kristal worked in his family's confectionary factory.

When the Jewish quarter of the city became a ghetto under Nazi occupation, Kristal was eventually sent to the infamous Nazi death camp Auschwitz.

His wife died but he survived, weighing just 37 kilos (81 pounds) at the end of the war, daughter Shula Kuperstoch said.

"But he gained the strength and then eventually travelled to Israel."

He moved to the northern Israeli city of Haifa and opened a sweet shop, marrying again.

Kristal himself did not give interviews as his health is frail, but Kuperstoch says he is in good spirits.

"He is a very positive man, very optimistic and with a good heart," she said.

In a 2014 interview with Israeli media, Kristal was once asked what he ate to live so long.

"There wasn't always food in the camps. I ate what I was given. I eat to live, and I don't live to eat," he said.

He also recalled throwing candy at the Emperor of Austria before World War I.

The previous oldest man, Yasutaro Koide of Japan, died on Tuesday at the age of 112.

Jeanne Louise Calment, who died in 1997, was the oldest verified person ever -- passing away in France aged 122 years and 164 days.