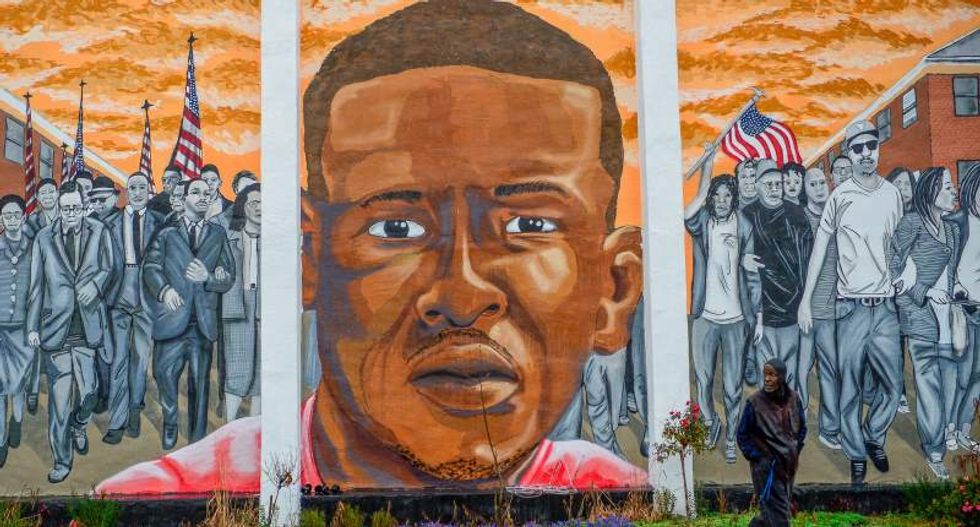 A man, who declined to offer his name, walks past a mural of Freddie Gray in the Sandtown-Winchester neighborhood of Baltimore, on Dec. 17, 2015. (Reuters/Bryan Woolston)

By Baynard Woods, The Guardian

State’s second-highest court rules it will not hear arguments in William Porter’s appeal case until March, after which court has months to reach decision

A scheduling decision by Maryland’s second-highest court Tuesday could push back for months the trial of several police facing charges for the death of Freddie Gray.

Porter is challenging a ruling that forces him to testify in a fellow officer’s case, despite the risk of incriminating himself before he is tried on his own charges of involuntary manslaughter, reckless endangerment, misconduct in office and assault for his role in Gray’s death.

Porter’s appeal of that ruling postponed the trial of Caesar Goodson, which was scheduled to begin 11 January. Goodson faces the most serious charges of the six officers implicated in Gray’s death, and is viewed as prosecutors’ best shot at a conviction. It will likely also hold up the trial of Sgt Alicia White, who was to be tried in February.

Porter was initially scheduled to be tried first so that prosecutors could use him as a material witness in their cases against Goodson, the van driver whose trial for second degree depraved heart murder was scheduled to begin this week, and White. But when the jury in Porter’s case couldn’t reach a decision and the judge declared a mistrial and rescheduled Porter’s case for June, things got complicated.

In what some have called an unprecedented move, the judge ruled last week that the state could compel Porter to testify by offering him limited use immunity. Gary Proctor, one of Porter’s attorneys, promised to appeal the ruling with the court of special appeals. The next day, that court issued a stay on the trial until it could hear the appeal. On Tuesday, the hearing date in that case was set for 4 March.

Court watchers say the court’s most recent decision solidifies the perception that officers on trial are getting better treatment than the typical defendant.

“I think the defense has succeeded in declaring that this is unprecedented but it is a very common tool of prosecution to compel testimony,” said Douglas Colbert, a law professor at the University of Maryland. “What’s taking place is not the experience of the typical defendant. The typical defendant rarely succeeds in gaining the attention of the appeals court to enjoin, to prevent a trial from commencing ... Typically, appeals courts wait until a conviction occurs and then there’s time periods for both sides submitting briefs. But at the pre-trial stage, it’s exceedingly rare for an appeals court to rule on a pretrial motion.”

Davon Neverdon, an activist who goes by the name PFK Boom, agrees, calling the appeal “a manipulation of justice”.

“These officers are getting the White House treatment,” he said, referring to a perceived disparity between the treatment of these officers and the average defendant in Baltimore.

The ruling on Porter’s appeal hearing may mean not only that prosecutors’ best shot at a conviction of Goodson is held up for months, but that trials for any of the six officers will not resume until late February. Edward Nero was scheduled to be tried on 22 February, followed by Garrett Miller on 7 March and Lt Brian Rice on 9 March.

The state has argued that allowing Porter not to testify in the case of Goodson would “result in irreparable harm to the People of Maryland by effectively gutting their government’s prosecution”, so it is not likely that it will proceed with prosecution of White until the appeal is settled, either.

This leaves a city -- already on edge, but with many patiently waiting for the wheels of justice to turn -- facing trials through the spring, when warmer weather encourages protest. It also means that the trials could bump up against the anniversary of Gray’s death in April.

In his first trial, Porter testified that he told Goodson that Gray needed to be taken to the hospital when he arrived to check out the prisoner.

“I suggested for officer Goodson to go to the hospital so he didn’t waste time,” Porter testified.

Goodson did not go to the hospital but continued on to the police precinct. Dr Carol Allan, the medical examiner, testified: “If [Gray] had gotten prompt medical attention, it would not have been a homicide.”

But Porter also repeatedly testified that he couldn’t give Goodson a direct order. “I can’t tell Goodson to do anything. I’m not Goodson’s supervisor,” he said.

Porter testified that he also told his own supervisor, Sgt White, that Gray needed to be hospitalized.

A gag order imposed by judge Williams prohibits any parties involved in the case from commenting.