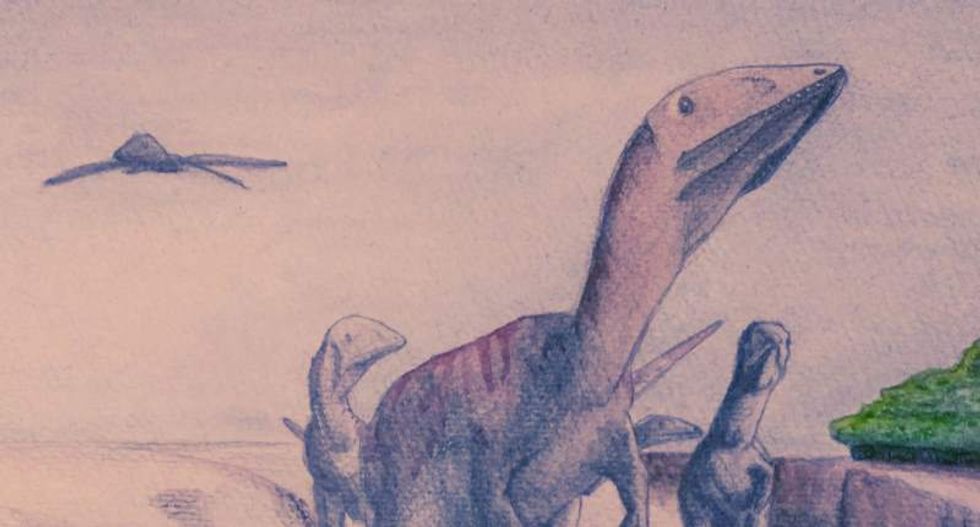 A watercolor illustration depicts the newly discovered dinosaur species Dracoraptor hanigani whose fossils were unearthed in Wales, in this handout image provided by Steven Vidovic on Jan. 20, 2016. (Reuters/Steven Vidovic/Handout via Reuters)

In the early years of the Jurassic Period, when the world was recovering from one of the worst mass extinctions on record, a modest meat-eating dinosaur from Wales helped pave the way for some of the most fearsome predators ever to stalk the Earth.

Scientists on Wednesday announced the discovery of fossil remains of a two-legged dinosaur called Dracoraptor that lived 200 million years ago and was a forerunner of much later colossal carnivores like Tyrannosaurus rex, Allosaurus and Spinosaurus.

The fossil is of a 7-foot-long (2.1-meter) juvenile, with adults reaching perhaps 10 feet (3 meters), said paleontologist Steven Vidovic of Britain's University of Portsmouth.

At the Triassic Period's end, not long before Dracoraptor appeared, roughly half of Earth's species went extinct. Scientists are uncertain of this primordial calamity's cause. Hypotheses include an asteroid impact like the one that doomed the dinosaurs 66 million years ago, volcanic activity or climate change.

This mass extinction event that ushered in the Jurassic was pivotal in letting dinosaurs become the dominant land animals.

The biggest land predators at the end of the Triassic were not dinosaurs, but rather rauisuchians, big four-legged reptiles. Rivers teemed with phytosaurs, huge crocodile-like reptiles.

Both these groups disappeared in the mass extinction, clearing the way for dinosaur carnivores that until then were only moderate in size to become the top terrestrial predators.

Vidovic said the Dracoraptor fossils, discovered in 2014 on a beach near the Welsh town of Penarth, represent some of the most complete dinosaur remains from this time, with 40 percent of the skeleton unearthed.

"Dinosaurs diversified and populated the ecological niches in the Early Jurassic."

It was an early representative of the theropod group that included the likes of T. rex, and had the same general shape as that beast, although much smaller.

"It had basically stumbled upon a winning formula for large terrestrial carnivores," Vidovic said.

The research appears in the journal PLOS ONE.