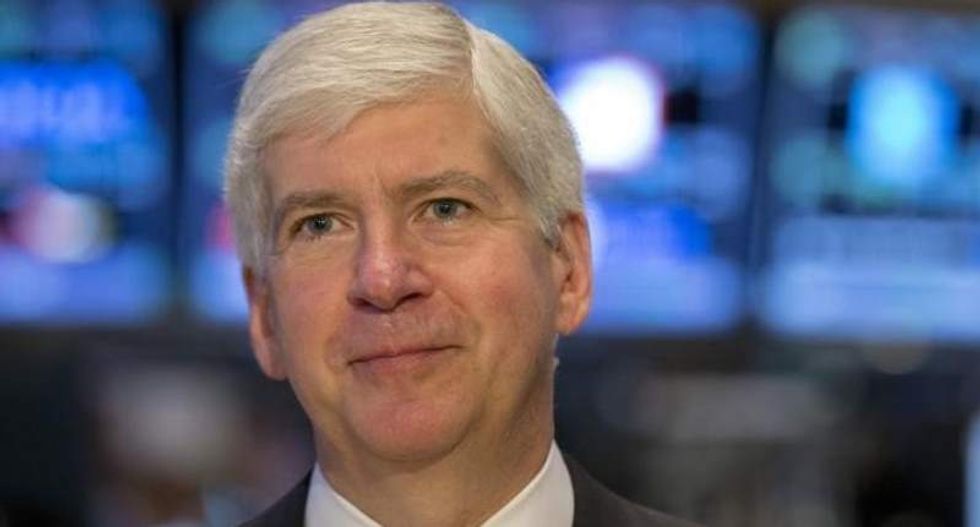 Michigan Gov. Rick Snyder (R) gives an interview on the floor of the New York Stock Exchange on May 8, 2015. (Reuters/Brendan McDermid)

Michigan Governor Rick Snyder, facing protests and lawsuits into the state's handling of contaminated drinking water in Flint, will make the crisis the main subject of his annual speech to lawmakers on Tuesday.

President Barack Obama was meeting on Tuesday with Flint Mayor Karen Weaver over the crisis. Separately, the U.S. Environmental Protection Agency said it acted too slowly to address the situation.

The Detroit News reported that Snyder would detail more than $28 million of supplemental spending on health treatment, replacement of faucets and fixtures in Flint schools and day care centers, and a study of the city's water pipes.

President Obama, acting on a request from Snyder, on Saturday ordered federal aid for state and local response efforts in Genesee County, which includes Flint, about 60 miles (100 km) northwest of Detroit.

"It's an opportunity for the president to hear from the mayor of Flint on the significant challenges that are facing that city," White House spokesman Josh Earnest said of the president's meeting with the mayor.

Protesters have demanded swifter state action and some have called for Snyder, a Republican, to resign. He has rejected those calls.

Financially strapped Flint was under control of a state-appointed emergency manager when it switched its source of tap water from Detroit's system to the more corrosive water in the nearby Flint River in April 2014 to save money.

The Flint River leached lead from the city pipes more than Detroit water did, leading to elevated levels of lead in the water and the blood of some children. Flint resumed using Detroit water in October.

At least three lawsuits have been filed over the crisis. The latest on Tuesday in Genesee County court seeks an injunction to stop Flint from issuing shutoff notices to residents, who are still receiving bills for water declared undrinkable.

Other Flint residents in November filed a federal lawsuit accusing the city and state of endangering their health.

Last week, Snyder sent the Michigan National Guard to distribute bottled water and other supplies in the area.

(Reporting by Serena Maria Daniels in Michigan, Suzannah Gonzales in Chicago and David Bailey in Minneapolis; Editing by David Gregorio)