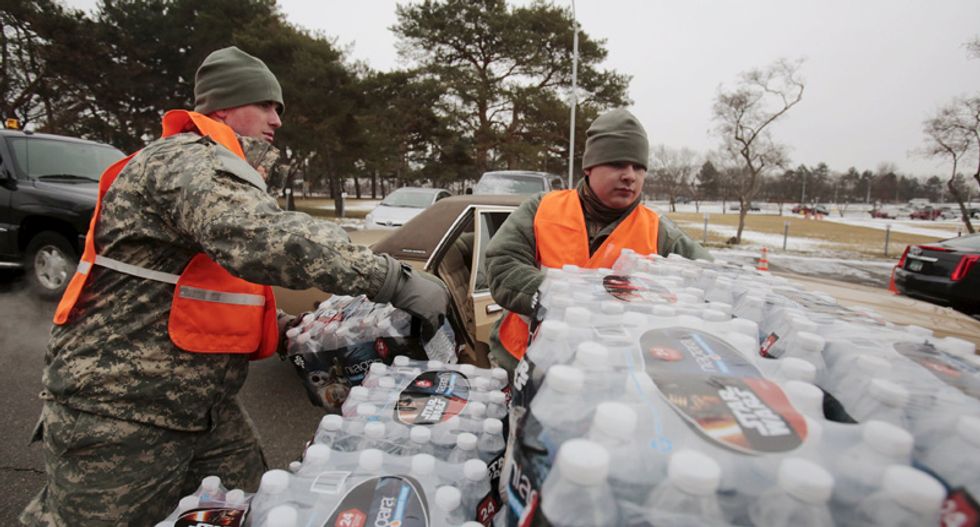 Michigan National Guard members help to distribute water to a line of residents in their cars in Flint, Michigan January 21, 2016. REUTERS/Rebecca Cook

Michigan's Republican governor on Friday blamed the water contamination crisis in the city of Flint on bureaucracy, citing a cultural problem with civil servants more focused on technicalities than common sense.

Rick Snyder, speaking on MSNBC, said problems over the switch to another water source that caused lead to contaminate the struggling city's drinking water stemmed from the actions of a few government workers.

"You have a handful of... 'experts' that were career civil service people that made terrible decisions... and we have to live with the consequences with that. They work for me so I accept that responsibility and we're going to fix this problem," he told MSNBC's "Morning Joe" program.

His comments came one day after the head of the Midwest region of the U.S. Environmental Protection Agency resigned because of the crisis.

Asked about the multiple local and national agencies involved in the back-and-forth in recent months over the city's water, Snyder said: "That's a huge bureaucratic problem, and that's part of the problem with culture in government."

Snyder has rejected calls from critics for his resignation over the crisis, which goes back to the 2014 decision to switch water supplies to the Flint River to save money.

Water from the river, known locally as a dumping ground, was more corrosive, causing more lead to leach from Flint's aging water pipes than the Detroit water the city previously used.

Residents complained about the water within weeks, but officials did not take action until October 2015 after tests showed some tap water and children with elevated levels of lead, a neurotoxin that causes brain damage and other health issues.

Although the city switched back to Detroit water, the water is still not safe to drink while officials wait for corrosive control chemicals to rebuild protection on pipes.

The ordeal has raised questions about the effect of inequality. Flint, a poorer, mostly African-American city of 100,000 about an hour north of Detroit, has been run by a state-appointed emergency manager since 2011.

Asked if the public health crisis was a case of so-called environmental racism, Snyder said "absolutely not."

Snyder added that officials have visited 30,000 homes so far to offer bottled water and water filters and plan to visit another 7,000 soon.

Longer term, he said extensive testing would need to be done by outside experts, especially in order to regain the public trust.

"I can understand why the citizens of Flint would have high skepticism," he told MSNBC.

(Reporting by Susan Heavey in Washington; Editing by Alistair Bell)