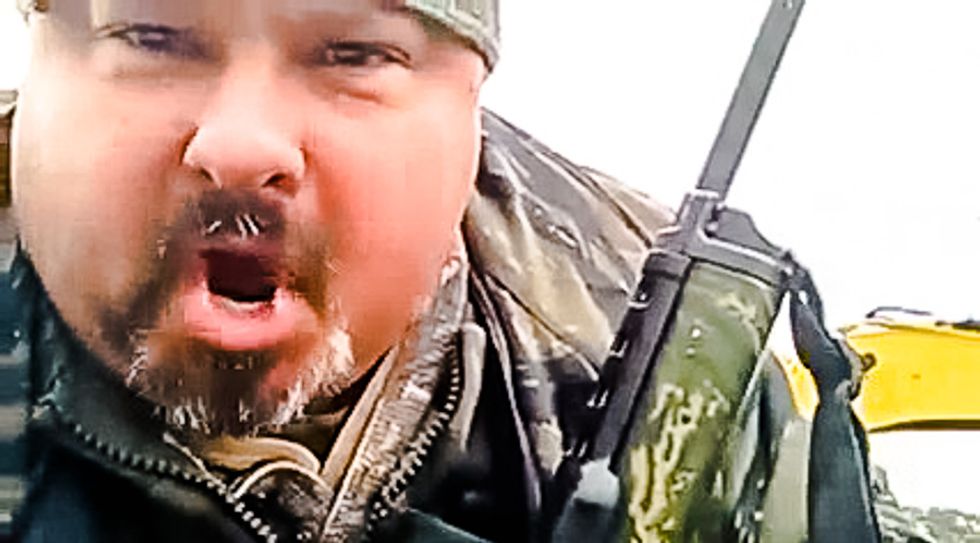 Four armed anti-government protesters held their ground at a remote U.S. wildlife refuge in Oregon on Friday, a day after the FBI released a video of the fatal shooting of one of the group's spokesmen during a traffic stop.

As the standoff with federal authorities neared the end of its fourth week, Greg Bretzing, special agent in charge of the Federal Bureau of Investigation's Portland office, said on Thursday night authorities were working "around the clock" to negotiate with the holdouts.

They are holed up at the Malheur National Wildlife Refuge, 30 miles (48 km) from Burns, a small ranching community in the state's rural southeast.

The occupation's jailed leader, Ammon Bundy, has issued two messages through his attorney urging the remaining protesters to stand down, saying they would continue to fight federal land policy through the courts.

Bundy and the protesters arrested with him are being held without bail and were due to appear for a detention hearing on Friday in federal court in Portland, Oregon.

A legal defense fund for Bundy that was set up online by his lawyers this week and aims to raise $100,000 had received total donations of about $2,000 by midday on Friday.

A day after the FBI released footage of Robert LaVoy Finicum's shooting, a group that had sought to mediate between law enforcement and the occupiers called for officers involved in the protester's death to be arrested.

In a statement, the Pacific Patriots Network also demanded the immediate removal of all "militarized" FBI staff and equipment from the area and urged like-minded Americans to hurry to Burns to support those standing "against these violent, malicious and deceitful tactics."

"The success of this mission depends fully on the number of people that will come to PEACEFULLY stand and demand the items above be initiated," the group said in its "Call to Action."

The takeover at Malheur began on Jan. 2 when Bundy and at least a dozen followers seized buildings at the refuge in a flare-up in the so-called Sagebrush Rebellion, a decades-old conflict over federal control of millions of acres in the West.

On Tuesday, Bundy and some of the protest's most recognizable members were stopped by the FBI and Oregon State Police as they drove to a speaking event. They were arrested, while Finicum sped from the scene before being shot.

Authorities said Finicum, 54, a rancher from Arizona who had acted as a spokesman for the group, was armed when he was killed.

Video from a law enforcement aircraft shows him fleeing from authorities in a white truck, nearly striking an officer while trying to evade a police barricade, then barreling into a deep snowbank and exiting the car.

The grainy footage shows Finicum raising his hands and then turning and flailing his arms. He then lowers his arms to his body and is shot by Oregon State Police troopers, according to the FBI.

Bretzing said Finicum can be seen reaching for his jacket pocket, where officers found a loaded 9mm semi-automatic handgun. But the lack of focus in the video makes it difficult to discern Finicum's precise movements.

Three other loaded weapons - two semi-automatic rifles and a revolver - were found inside the truck, Bretzing said.

The aerial footage was shown at an FBI news conference hours after Todd Macfarlane, a lawyer for Finicum's relatives, said other evidence may exist that shows Finicum was not threatening authorities. Macfarlane could not be reached for reaction to the FBI video release.

Macfarlane said one of the sources for his view was the version of events from Victoria Sharp, who says she was at the scene and watched Finicum die.

Sharp said in an interview with Reuters that Finicum was shot with his gun in his holster and his hands in the air, shouting and walking toward police.

Neither state nor federal law enforcement would comment on whether Sharp was at the scene or on her description. Reuters was not able to independently confirm her version of the events.