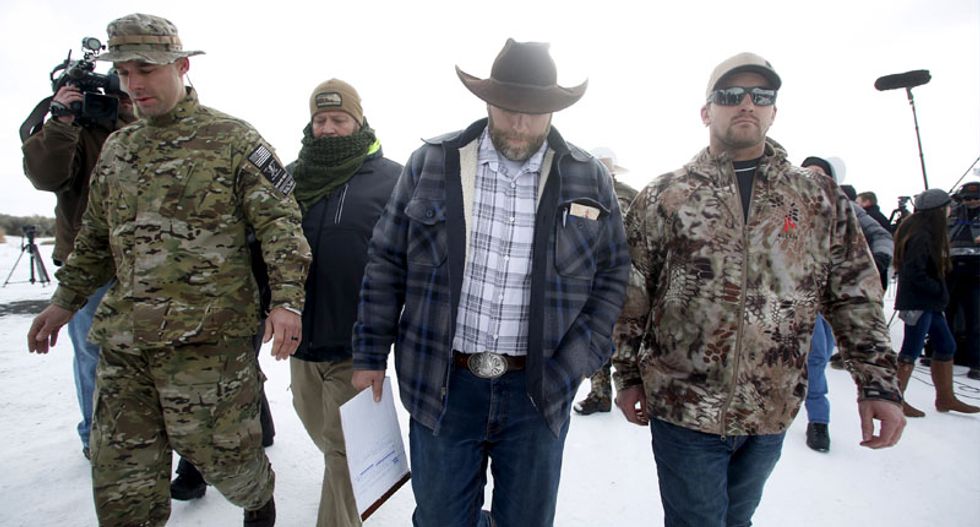 A standoff at a remote U.S. wildlife center in Oregon rolled into a fourth day on Tuesday with self-styled militiamen vowing to press on with the protest against the U.S. government even as local officials told the group to go home.

Saturday's takeover of the Malheur National Wildlife Refuge outside the town of Burns, Oregon, was spurred by the imprisonment of two ranchers for setting fires that spread to federal land.

The occupation marked the latest protest over federal management of public land in the West, long seen by political conservatives in the region as an intrusion on individual freedom and property rights.

Protest leader Ammon Bundy, whose father's ranch in Nevada was the scene of an armed standoff against federal land managers in 2014, said his group had named itself Citizens for Constitutional Freedom and was defending the Constitution and personal liberty against the federal government.

A Twitter page under Bundy's said the group had no intention of leaving the refuge until its conditions are met.

The protesters have said they aim "to restore and defend the Constitution" to protect the rights of ranchers and start a national debate about states' rights and federal land-use policy that they hope will force the federal government to release tracts of Western land.

Many residents in Burns, a town of some 3,000 people about 280 miles (451 km) southeast of Portland, viewed the occupation as the work of outside agitators.

Harney County Sheriff David Ward, in a statement on behalf of himself and County Judge Steven Grasty, asked group members to stand down.

"It is time for you to leave our community, go home to your families, and end this peacefully," Ward said.

The FBI said it was working with state and local law enforcement for a peaceful resolution and federal law enforcement officials have kept their distance from the wildlife refuge, which is closed to visitors. They are following U.S. policy guidelines instituted to prevent such standoffs from turning deadly as they did in Ruby Ridge, Idaho, and Waco, Texas in the early 1990s.

The ranchers whose cause Bundy's group has embraced - Dwight Hammond Jr. and his son, Steven - surrendered to federal authorities in California on Monday after being resentenced to longer prison terms for arson.