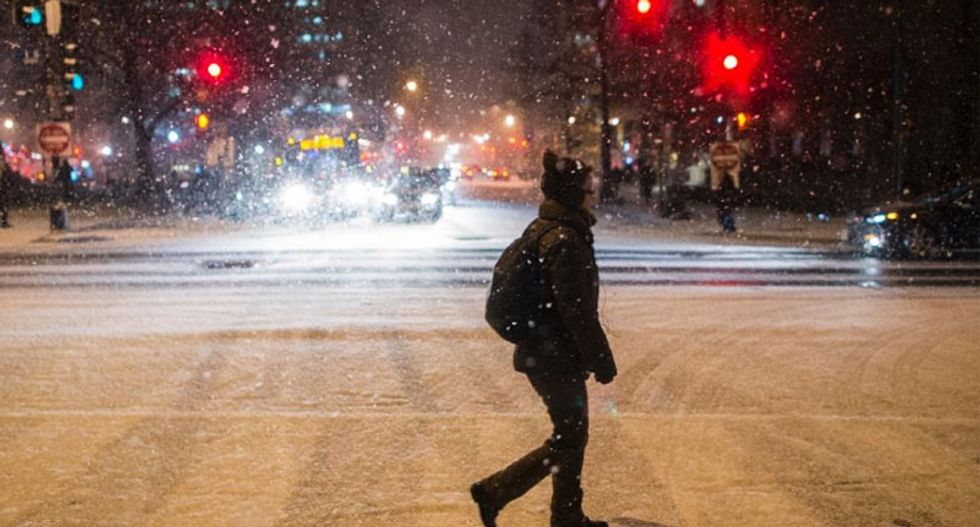 A woman crosses the street as it snows in Washington, DC on January 20, 2016 (AFP Photo/Andrew Caballero-Reynolds)

The eastern US braced Friday for a monstrous blizzard that has prompted thousands of flight cancelations and the looming shutdown of Washington's public transportation system.

The US capital and the surrounding area could see up to two feet (61 centimeters) of snow accumulate in a short time from Friday to Saturday, coupled with fierce winds and blinding squalls, weather experts said.

The federal government in Washington is closing at noon Friday because of the storm. As several states made frantic preparations, as far south as Kentucky the governor said he too was shutting down government offices on Friday.

So far more than 4,500 flights originally scheduled for Friday and Saturday within, into or out of the US have been cancelled, according to the flight monitor flightaware.com.

Tens of millions of people could be affected by snow, and millions more by ice and other dangerous conditions, the National Weather Service said.

"You put all the ingredients together, you can get a storm like this and it's happening in real time," NWS director Louis Uccellini said.

With authorities warning the storm could bury Washington under more snow than it has seen in nearly a century, officials announced they would take the unusual step of closing down the city's rail and bus system from Friday night until Monday morning.

The Metro system -- the second busiest in the US after New York -- serves about 700,000 customers a day in Washington, Maryland and Virginia.

It is likely the longest closing in the system's 40-plus year history, The Washington Post reported.

Rail carrier Amtrak said it will be running fewer trains over the weekend between Virginia and Boston.

Heavy snow was expected across at least 15 states, with icy rain and coastal flooding in other areas, according to the Weather Channel.

The NWS issued a blizzard warning for Washington, and said New York could catch the tail end of the storm as the weekend progresses.

"Heavy snow and blowing snow will cause dangerous conditions and will be a threat to life and property," the NWS warned.

"Travel is expected to be severely limited if not impossible during the height of the storm Friday night and Saturday."

Uccellini said the system had "the potential of being an extremely dangerous storm that could affect over 50 million people."

"We are talking about a potentially paralyzing storm that is already setting up," he told reporters.

American Airlines said it was canceling hundreds of flights, including at Washington's two airports on Saturday. All flights on that day will also be scrapped in Baltimore and Philadelphia, a spokeswoman said, adding that service would likely resume Sunday and be reduced Friday.

"I've lived in DC most of my life and I don't know if I've lived through a forecast like this. It's an extremely large storm," she said.

States of emergency were also declared in neighboring Virginia and Maryland.

Snow flurries Wednesday left Washington traffic at a standstill, even snaring President Barack Obama's motorcade, which spent more than an hour navigating the icy streets from Andrews Air Force Base to the White House -- normally a trip of 20-25 minutes.

If the blizzard dumps as much snow in Washington as forecast, it could surpass a record set in 1922 by a storm that dumped 28 inches over three days and killed 100 people after a roof collapsed at a theater.

The NWS said it was unclear if snow would fall through early Saturday in the corridor stretching from New York City to Boston, which saw massive amounts of snowfall last winter.

New York Mayor Bill de Blasio, however, told reporters that his city was preparing for up to 12 inches of snow, as he issued a hazardous travel advisory for the weekend.

"We're bracing for the first big storm of the winter. I want to let my fellow New Yorkers know we're prepared, the agencies here are ready for what's coming up ahead," de Blasio said.

The frigid weather marks a stark departure from what has otherwise been a mild winter along the eastern seaboard.

Just a month ago on Christmas Eve, the NWS reported that temperatures in New York's Central Park peaked at 72 degrees Fahrenheit (22 Celsius), the warmest ever for the day since records began in 1871.

Many kids however are excited about the snow, and parents across the region are trading tips on where to take them sledding once the blizzard dies down.