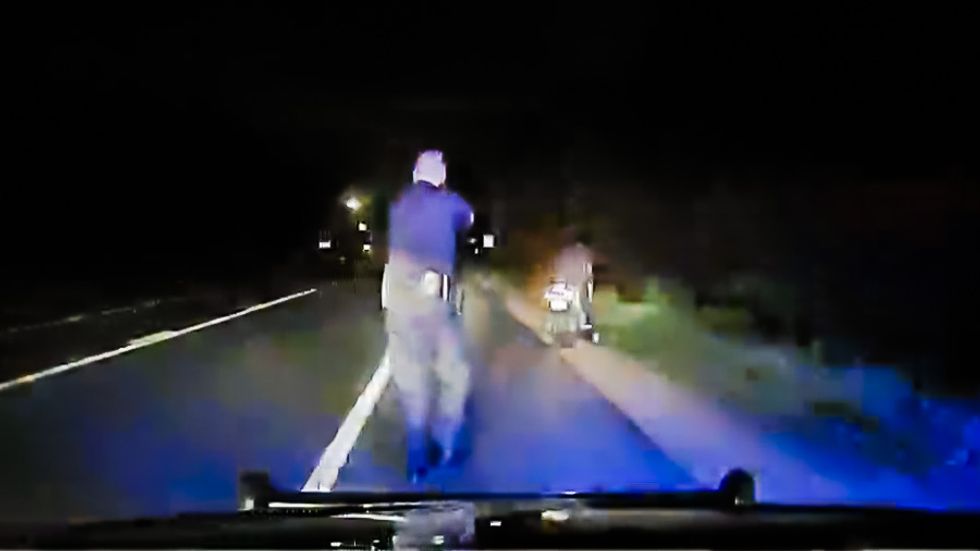 A Minnesota policeman who shot a man in the arm following a high speed chase said that he made the mistake due to stress and "muscle memory" from a recent training exercise.

After pulling over Hovland-Knase, Soppeland can be heard yelling for the suspect to "get your hands where I can see them."

Almost immediately, the sound of a gunshot is heard.

"Please help me!" Hovland-Knase begs as the officer approaches, holstering his gun to help the injured man steady the motorcycle.

Soppeland begins administering first aid after returning from his cruiser with medical supplies.

"You actually shot me, didn't you?" Hovland-Knase says.

"I'm not going to say anything right now," Soppeland explains. "But you know, it was not intentional, I can tell you that."

According to court records, Hovland-Knase was later found guilty of fleeing an officer.

Soppeland told detectives that the shooting "was not my conscious choice...I could feel the effect of the adrenaline."

"As I was giving commands, I drew my firearm with my right hand, I planned to steady it with my left hand. When my hands made contact, the firearm discharged once unintentionally," he insisted.

At the suggestion of the detectives, Soppeland agreed that a training exercise 20 days earlier was partially responsible for the incident.

“Yes, I feel the muscle memory from that recent training of squeezing the trigger contributed to the unintentional discharge during a high stress situation," he said.

The Eden Prairie Police Department told KMSP that Soppeland had returned to duty after a "full investigation of the incident was completed by the Hennepin County Sheriff’s Office."

"Based on the findings of the investigation, no further disciplinary action was taken and Soppleand has returned to regular duties with the Eden Prairie Police Department," a statement from the department noted.

Watch the video below from KMSP.