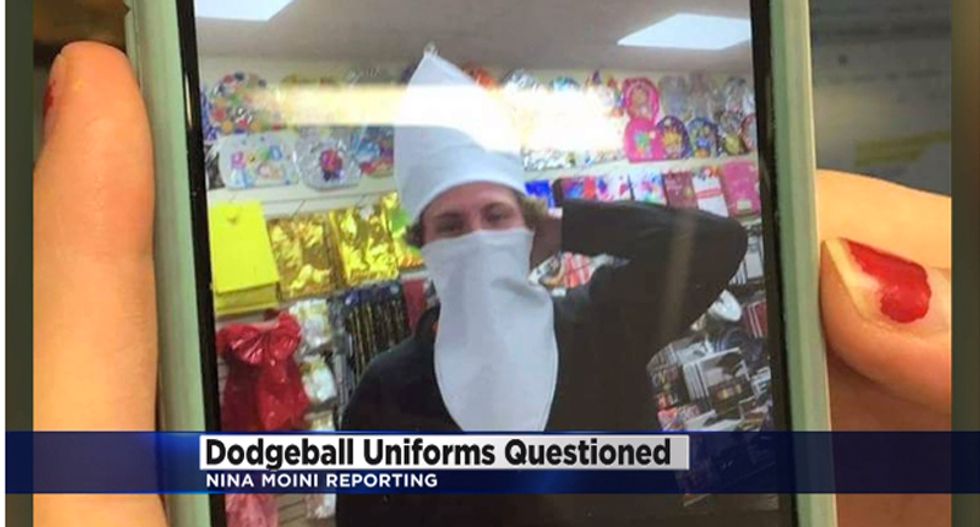 Administrators at at Minnesota high school are weighing suspending at least seven students who showed up for a school dodgeball tournament dressed up as members of the Ku Klux Klan.

According to WCCO, the students who attend Mound Westonka High School were spotted by parents and fellow students wearing the white pointed hats signifying the Klan. One picture shared on social media showed a masked student identified as the "Grand Wizard" -- an honorific give to Klan leaders.

“I turned around, and the team behind me looked like they came in with a Ku Klux Klan uniform -- or an interpretation of it,” said high school senior Ryan Anderson. “It was something to say the least.”

According to administrators, they are investigating the incident along with reports that students were making white supremacist comments on social media.

Some students have attempted to defend the dodgeball team by starting up a hashtag campaign under “unsuspendteamdoot.”

A statement released by the Westonka School District said, “During the investigation, it was determined that actions taken by some students, both on and off campus, were in violation of district policy, and appropriate action was taken in accordance with district policy. Investigation into possible misconduct by other students is ongoing."

The Westonka incident comes just days after students at an Arizona high school were suspended for spelling out the word "n****r" with their t-shirts at a school event.

Watch video below from WCCO: