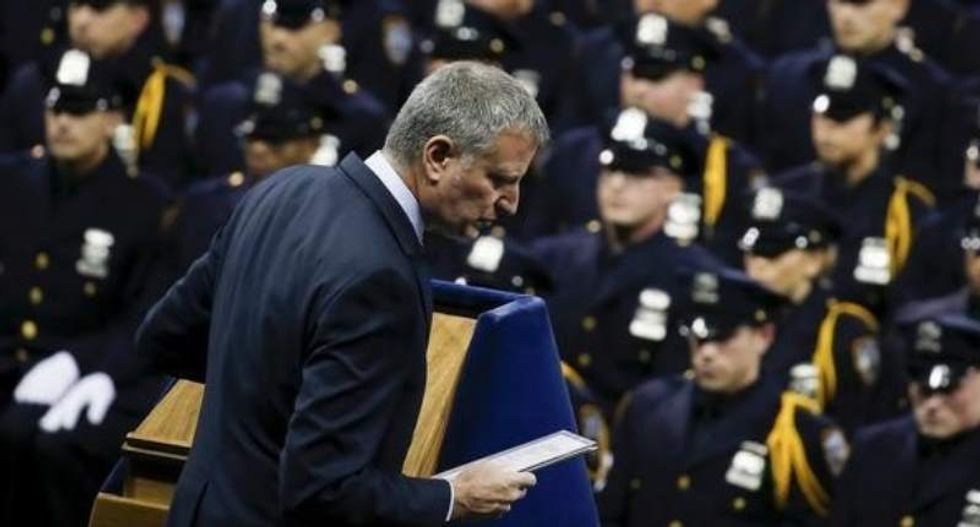 New York Bill de Blasio walks off stage after speaking to police officers who were taking part in a graduation ceremony at Madison Square Garden in the Manhattan borough of New York o Dec. 29, 2015. (Reuters/Carlo Allegri)

The resolution was submitted on Wednesday, the mayor's office said. It requests the fund's administrators to carry out an analysis on divesting from stocks such as Smith & Wesson Holding Corp and Sturm Ruger & Co.

It makes good on the mayor commitment after the mass shooting in San Bernardino, California, in November, to require all five funds in the city's $155 billion public pension system to dump their investments in gun stocks.

"We should not be investing in companies that manufacture and market assault weapons to civilians - ever," de Blasio said in a statement.

The mayor's office said it expected the New York City Police Pension Fund (PPF) to vote on the resolution in the coming months. It will submit similar resolution to the Uniformed Fire Pensions and the Board of Education Retirement System.

Representatives of the PPF could not immediately be reached for comment.

Funds for the city's police and fire departments and the city's board of education have not divested.

Investments in gun makers across the three funds amounted to $2.1 million, as of Sept. 30, a person with knowledge of the assets told Reuters in December. The person asked not to be named as the funds do not publish detailed asset lists.

The three funds had assets of $46 billion as of that date, the person said.