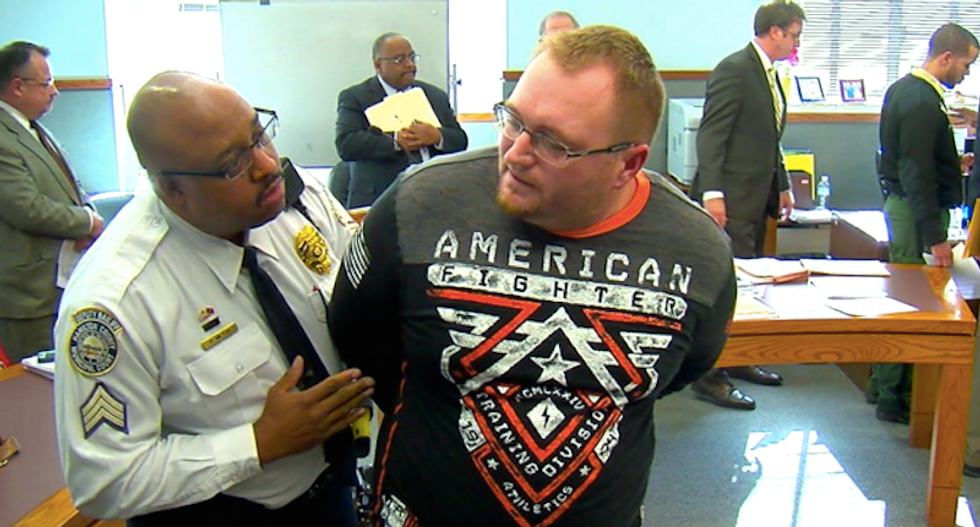 A judge lambasted an Ohio man who admitted trying to have an innocent rescue dog killed instead of his own "vicious" pet.

Jason Dotson, of Springfield Township, had been placed on probation in October, after his pit bull-type dog attacked and nearly killed a medical therapy dog walking on a leash with its owner, reported the Cincinnati Enquirer.

Dotson's dog also bit Robert Martin, who has Parkinson's disease, as he tried to save his own dog, Buddy, who survived but can no longer work as a service animal due to injuries suffered in the attack.

The 32-year-old Dotson was ordered by a judge to take his pet to be humanely euthanized by the Society for the Prevention of Cruelty to Animals -- but instead he tried to fool the animal shelter, the court and even the victim.

Police said Dotson gave a fake name and address to Martin, but a mail carrier helped officers track him down.

Court documents show that Dotson, who was charged with confinement of dogs after the attack, initially failed to have his dog put down and was ordered to appear in court on a probation violation.

Prosecutors revealed during that hearing that Dotson had adopted another dog from the SPCA and returned two days later, telling employees that the rescue dog was the animal that had been court-ordered for destruction.

However, his plot was foiled when an SPCA technician recognized the rescue dog and scanned its microchip -- which proved it was the innocent dog and not Dotson's vicious pet.

Dotson's attempt to have the innocent dog killed instead of his own earned him a 30-day jail term at the Hamilton County Justice Center and a stern lecture from the judge.

"In my 10 years as a judge I can't recall a more cold and heartless act," said Hamilton County Municipal Court Judge Brad Greenberg. "If I could give you more time, legally, I would."

"It's one thing for you to ignore a court order, it's quite another thing to try to perpetrate a fraud on this court -- and you tried to have an innocent dog killed," the judge added.

Dotson's pet has since been put down.

He admitted to his crime, apologized to the court and paid restitution.