Oregon man joining Bundy militants threatens cops in drunken rant: 'I will kill all of you' 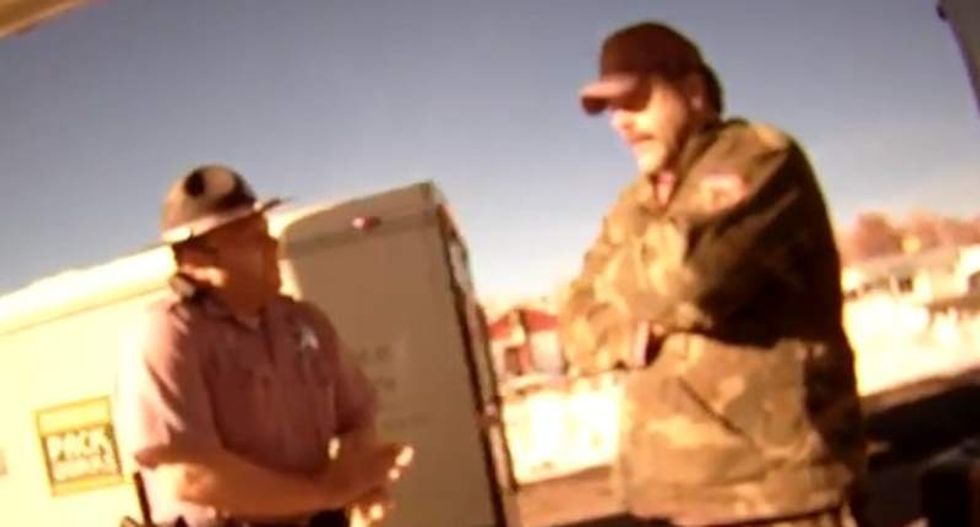 A 54-year-old Oregon man allegedly planning to join the militant group occupying the Malheur Wildlife Refuge can be seen threatening to kill sheriff's deputies in footage posted on Monday by KATU-TV.

Body camera footage shows Joseph Arthur Stetson telling a Harney County deputy, "I'm planning to go out there and protect the Bundys, be their personal guard. If anybody wants to kill them, they have to kill me first."

The encounter on Monday was filmed at a local market after deputies responded to a report of an armed man on the premises. Stetson was reportedly carrying a pellet gun.

"What concerns me right now, as I'm talking to you, I can smell some alcohol on your breath," the deputy tells Stetson. Stetson responds by saying that he drank some NyQuil earlier in the day, then refuses to take a field sobriety test.

"I was a colonel in the United States armed forces," he says. "Green Beret."

He then reaches into his pocket, only for the deputy to stop him by grabbing his arm before telling him, "You're making me a little bit nervous right now" and motioning for a colleague to assist in handcuffing Stetson.

As he's being handcuffed, Stetson says, "I will kill all of you. Don't believe me? If I go to jail, when I come out, I'll kill you."

As the arrest continues, Stetson can be heard speaking more angrily, saying, "I'm a Green Beret colonel, you damn sons of bitches. Freaking Nazi Germany, that's all you are. I can't be killed anyway."

He then yells at a nearby state trooper that he is being subjected to an "illegal arrest" and vowing not to harm state troopers, unlike the deputies.

"I am the last hope," Stetson yells. "I am a freakin' colonel, Green Beret. My record is sealed by Ronald Reagan."

Watch the body camera footage, as posted online, below.