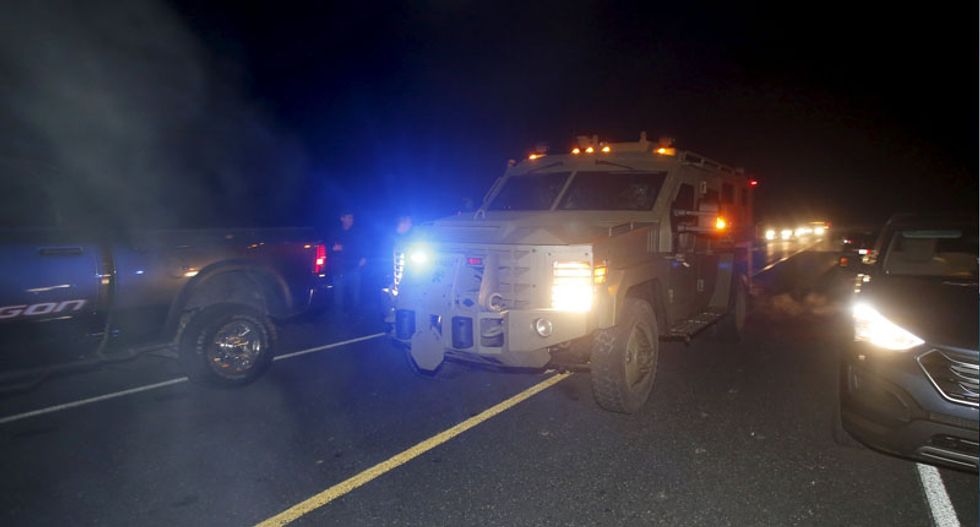 An amoured vehicle is seen at the police perimeter around Malheur National Wildlife Refuge near Burns, Oregon January 27, 2016. REUTERS/Jim Urquhart

Police and federal agents sought on Thursday to convince a handful of remaining protesters to abandon their occupation of a U.S. wildlife refuge in Oregon following the shooting death of a comrade and calls from their jailed leader to stand down.

It was not certain how many holdouts were still hunkered down in a cluster of small buildings inside the Malheur National Wildlife Refuge in northeast Oregon as of Thursday morning, but in a video posted overnight on YouTube, activist David Fry said he was among five people still there.

Eight more occupiers have left the compound since law enforcement surrounded it after taking protest leader Ammon Bundy and other members of his group into custody on Tuesday evening, the FBI said in a statement.

"The FBI and our partners continue to work around the clock to empty the refuge of the armed occupiers in the safest way possible," the agency said in its statement.

Bundy left the refuge on Tuesday afternoon accompanied by members of his leadership team en route to speak at a community meeting in John Day, Oregon, and was stopped by law enforcement along Highway 395.

Shots were fired and one protester was killed before Bundy and several others were taken into custody. Activists have identified the slain man as Robert LaVoy Finicum, a rancher who acted as a spokesman for the occupiers. Ammon's brother, Ryan, was wounded in the incident.

Law enforcement officials, citing an investigation, have refused to say what led to the fatal shooting but pleaded with protest members to leave the refuge peacefully.

Following a court appearance in Portland on Wednesday, Ammon Bundy, in a statement read by his attorney, urged the holdouts to stand down, saying he would carry on the fight in the legal system.

"To those remaining at the refuge, I love you. Let us take this fight from here," he said. "Please stand down. Go home and hug your families. This fight is ours for now in the courts. Please go home."

In an audio recording released by Ammon Bundy's attorney on Thursday, Bundy's wife Lisa repeated his message to the protesters remaining at the wildlife refuge.

"I spoke with Ammon's lawyers yesterday and heard from his voice that those were his instructions: he wants people to go home; to go to their families," Lisa Bundy said in the brief recording.

Bundy and at least a dozen armed individuals holed up at the refuge on Jan. 2 in a flare-up in the so-called Sagebrush Rebellion, a decades-old conflict over federal control of millions of acres in the West.

In the YouTube video, Fry said some activists fled so quickly after Bundy's arrest that they left their guns.

"Right now, the situation is that they're willing to let, out of five people left here, four of us are allowed to leave, and one of them ... he has a felony warrant," Fry said.

Fry said his group will not leave the refuge unless authorities drop the charges against the man accused of obstructing a federal worker from doing his job.

Of the eight people who have left the refuge since Bundy's arrest, three were taken into custody, the FBI said in it's statement.

Jason Patrick, who remained at the refuge following Bundy's arrest, told Reuters by phone some protesters were leaving through checkpoints but he rejected the word "surrender."

Patrick was among the three arrested late Wednesday, according to the FBI.

Reactions to the takeover from residents in Burns, about 30 miles (48 km) from the refuge, have included sympathy for two imprisoned local ranchers whose plight began the protest, to dismay at the armed occupation by individuals seen as outsiders.