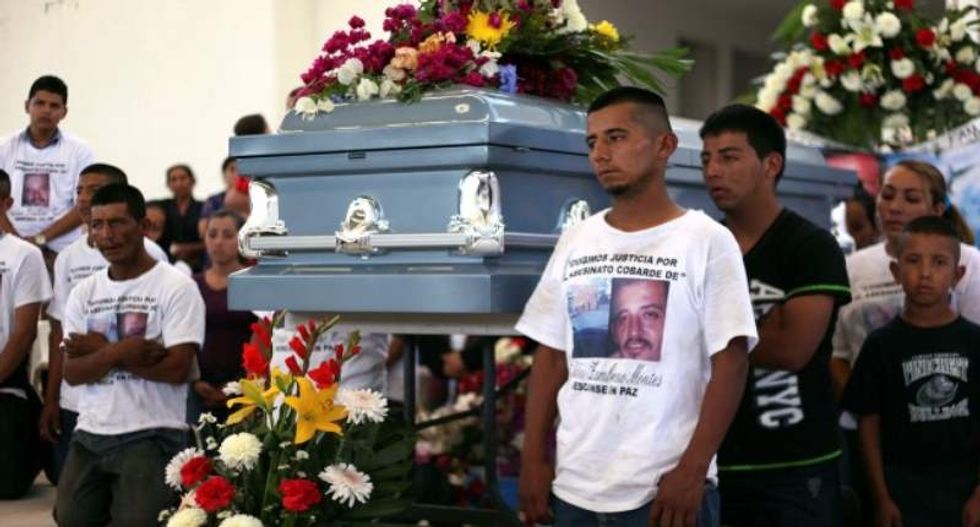 Relatives of Antonio Zambrano-Montes kneel next to his coffin during a funeral mass in Pomaro, in the Mexican state of Michoacan on March 7, 2015. (Reuters/Alan Ortega)

The parents of a Mexican immigrant fatally shot by police in Washington state have filed a wrongful death suit against local authorities and the officers who killed him, accusing them of excessive force, an attorney said on Wednesday.

Antonio Zambrano-Montes, a farm worker in the small city of Pasco, 200 miles (320 km) southeast of Seattle, was shot by three patrolmen on Feb. 10, 2015 during a confrontation that was recorded by a passerby and posted online.

On the video, Zambrano-Montes was seen throwing rocks at the officers near a busy intersection before running away.

In a lawsuit filed in U.S. District Court for Eastern Washington, Zambrano-Montes' parents say their son's death was a violation of federal law that prohibit police use of excessive force when making an arrest.

"In this case, it’s obvious that 17 shots, resulting in 7-8 bullet wounds in a man who was first fleeing and then attempting to surrender - was excessive in the extreme," attorney Charles Herrmann said in a press release.

The killing was among a series of fatal incidents across the United States that have put law enforcement agencies under scrutiny over their use of force, particularly against minorities. It prompted demonstrations in Pasco, which has a Latino majority.

The lawsuit names the city of Pasco, its police chief, Robert Metzger, and the three officers who fired at Zambrano-Montes.

Two of the officers involved, Adam Wright and Adrian Alaniz, were cleared of wrongdoing in September and returned to duty following an internal police investigation. The third officer, Ryan Flanagan, resigned.

His parents' legal action does not name an amount, but the Tri-City Herald newspaper reported that a claim was filed with the city of Pasco in advance of the lawsuit seeking $4.76 million.