Pentagon chief Ashton Carter: Some partners in anti-ISIS alliance do 'nothing at all' 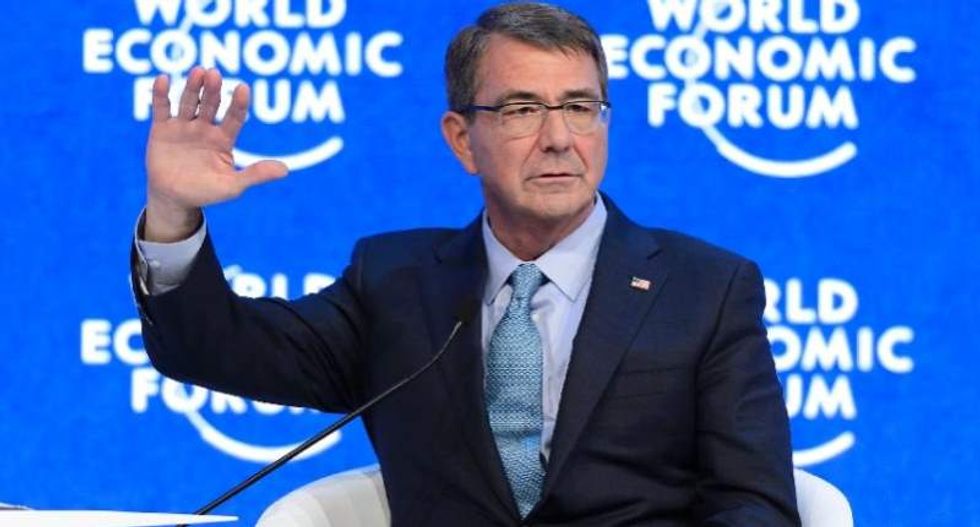 Secretary of Defense Ashton Carter gestures during a special session of the WEF annual meeting in Davos, on Jan. 22, 2016. (Agence France-Presse/Fabrice Coffrini)

Several members of the US-led coalition attacking the Islamic State group in Iraq and Syria are doing "nothing at all" to help destroy the jihadists, US Defense Secretary Ashton Carter said Friday.

His comments mark a departure from the Pentagon's typical depiction of the 65-member coalition, which carries the slogan "One mission, many nations," and is frequently touted to highlight global resolve in the predominantly US effort to defeat the IS group.

"Many of them are not doing enough, or are doing nothing at all," Carter said in an interview with CNBC on the sidelines of the World Economic Forum in Davos, Switzerland.

"We can do a lot ourselves ... (but) we are looking for other people to play their part," he added, without singling any country out.

In a separate interview with Bloomberg TV, Carter called the anti-IS alliance a "so-called" coalition, highlighting frustrations the Pentagon has with some partners -- particularly Sunni Arab nations -- not doing enough.

"We need others to carry their weight, there should be no free riders," he said.

Carter has spent the past week in Europe, primarily in Paris, where he sought to persuade allies to step up their efforts against the IS group.

He is meeting with representatives from another 26 allied nations next month to make the same appeal.

Carter reiterated calls for one such partner, Turkey, to bolster its fight against the jihadists.

Turkey is allowing the United States to use Incirlik, a geographically vital air base in the south, to strike IS targets in Iraq and Syria, but Carter said Ankara needs to do more to secure its lengthy border with Syria.

"Turkey is a long-time friend of ours," he said during a Davos question-and-answer session.

But "the reality is" that it has a border that "has been porous to foreign fighters."

"They're on the list ... it's not a small list, of countries that I think could make contributions that are distinctive, unique and necessary to the defeat of ISIL," he added, using an alternative acronym for the IS group.

Some Arab and Gulf countries including Saudi Arabia are nominally part of the coalition, but are now more focused on fighting Iran-backed forces in Yemen.

The United States has carried out the bulk of the nearly 9,800 air strikes launched in Iraq and Syria since the summer of 2014.

But despite calls for additional help, Carter insists the coalition has the jihadists on a back foot, especially since the recapture of the Iraqi city of Ramadi and the targeting of their financial and illicit oil-selling capabilities.

In the wake of the terror attacks in Paris in November that left 130 dead, France and Britain joined efforts in Syria.

Some of the other nations to have conducted strikes in Iraq or Syria include Australia, Belgium, Canada, Denmark, Jordan, the Netherlands, Saudi Arabia, Turkey and the United Arab Emirates.

Dozens more countries, including Iceland, Italy and Panama, have pledged varying degrees of support, for instance through the training of local security forces.

Carter's exasperation could reflect pressure from Washington, where hawkish critics say the Obama administration is moving too slowly to defeat the IS group.

The coalition has killed thousands of their fighters and reclaimed large areas they once held, but the jihadists are still launching attacks around the world, including in Indonesia, Afghanistan and Paris.

"They popped up in Jakarta, they popped up in Europe. They are global, it's going to require a global response," said Colonel Steve Warren, a Baghdad-based spokesman for the coalition.

The United States, sometimes referred to as the world's policeman, frequently stresses the importance of partnering with other nations in its military interventions.

Ahead of the highly contentious 2003 invasion of Iraq, the administration of George W. Bush was criticized for describing a "Coalition of the Willing" that included tiny countries such as Palau and the Marshall Islands, while major players like France and Germany sat out.

Derek Chollet, former assistant secretary of defense for international security affairs and a senior advisor at the German Marshall Fund, said today's coalition is very different from that pre-Iraq alliance.

"The world was deeply divided over the wisdom and legitimacy of US actions in Iraq," he told AFP.

"With (IS), it's a totally different dynamic. The world is completely together in the importance of fighting ISIL. Now the question is less one of legitimacy ... now it's just a question of how can we bring more of our capabilities into this effort," he added.