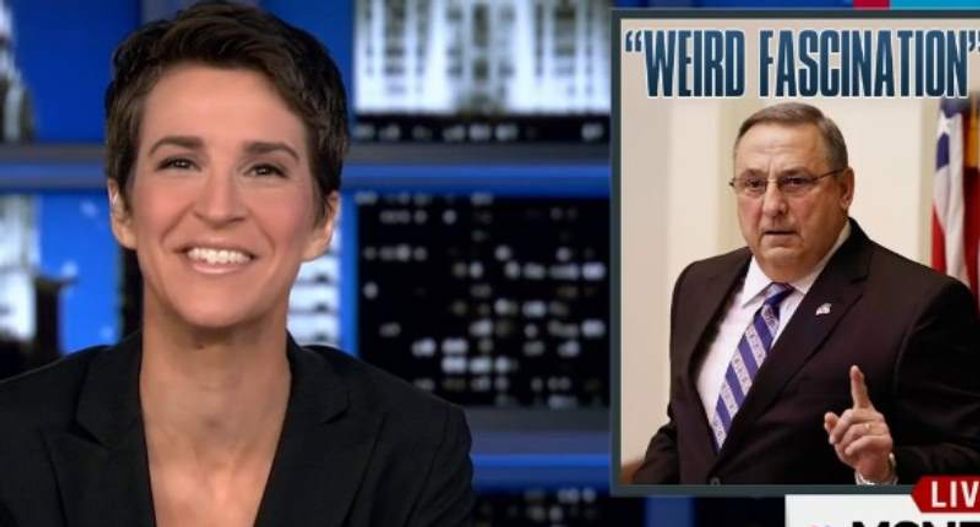 One of Maddow's staffers contacted the governor's office asking if LePage still intended to skip the annual address and instead "send [lawmakers] a letter" in response to a discussion -- since tabled -- on whether to impeach him.

"Why am I gonna go up and face people and talk to them in an audience that just the day, you know a week or two before they're trying to impeach me?" LePage complained at a radio show at the time.

Maddow then posted screenshots of a Jan. 18 email exchange between her program and LePage's spokesperson, Peter Steele.

"Why does Rachel Maddow have such an unnatural obsession with Governor LePage?" Steele wrote. "Her neurotic fixation on him is kind of bizarre."

"Is this seriously your response?" the staffer wrote back. "Should we take this to mean that the governor has not yet made up his mind?"

"It is a serious question," Steele replied. "Does Rachel have ties to Maine? If not, what is her weird fascination with him?"

After reading the first exchange, Maddow jokingly asked, "So that's a no?" before posting another exchange two days later.

When Maddow's staffer wrote back asking Steele if he could answer the original question -- whether LePage is giving the speech or not -- Steele said that he could, then demanded, "You first. What's with Maddow's obsession with the governor?"