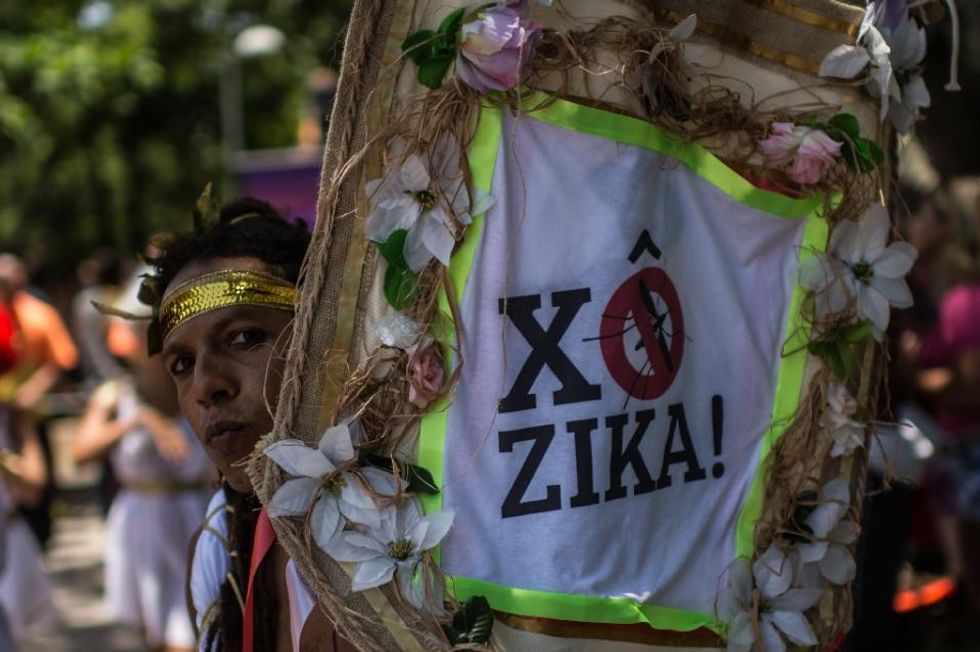 Revelers raise awareness of the need to prevent the spread of the Zika virus in the first carnival street parade group on the streets of Rio de Janeiro, Brazil on January 23, 2016 (AFP Photo/Christophe Simon)

The first city in South America to host the Games promised to attack breeding sites and to shield visitors from a virus whose dramatic spread, six months from the opening ceremony, is already threatening to trigger panic.

Zika is linked to serious birth defects, including microcephaly, in which babies born to women infected during pregnancy have abnormally small heads.

A surge in incidents across Latin America, notably in Brazil, has prompted the United States and other governments to warn pregnant women against traveling to the region -- an alarming prospect for Brazil as it gears up to light the Olympic torch on August 5.

As authorities and medical experts admit their inability to control the virus, Rio officials vowed "intensifying" efforts to eradicate mosquitoes from sites due to see hundreds of thousands of tourists, not to mention the world's best athletes.

"The mayor's office will be intensifying inspections," City Hall said in a statement. "About a month before the opening of the Games a team will visit all competition sites to eliminate possible concentrations."

The city health department fields 3,000 public health agents all year but "during the Games there'll be a dedicated team focused on the Olympic installations," the mayor's office said.

One factor helping the campaign, it noted, is that the Games will take place during the southern hemisphere winter, when the insects are less active.

Unlike some other international health scares, the Zika virus is not spread person to person. And for most people who get infected, the flu-like symptoms will clear up in about a week.

But the specific threat to pregnant women and their fetuses, and the seeming impossibility of avoiding mosquitoes in tropical countries, has given this crisis extra bite.

Brazil has recorded 3,893 microcephaly cases since an unusual spike in the rare condition was noticed in the country's northeast in October. Previously an annual average of 160 cases was the norm.

And short of not getting pregnant, there is no foolproof method for avoiding risk.

"For nearly 30 years the mosquito has been transmitting these illnesses to our population and since then we've been fighting, but we are losing the war," he was quoted as saying by Brazil's G1 news site.

Rio officials say their health workers will focus on getting rid of stagnant water, an easy breeding ground for mosquitoes.

However, about 80 percent of mosquito breeding takes place in and around housing, "which shows that the fight... is a duty for all," the mayor's office said.

Ahead of the Olympics, the city is already being put to the test by the annual carnival, which is just getting under way and will see huge crowds, including many tourists.

At one street party Saturday, carnival-goers danced to a song that caught the mood of fear -- and defiance -- in the Olympic city.

"When the water's stagnant, the larvae come, the larvae give birth to the mosquito," one verse went. "Chase away Zika!"