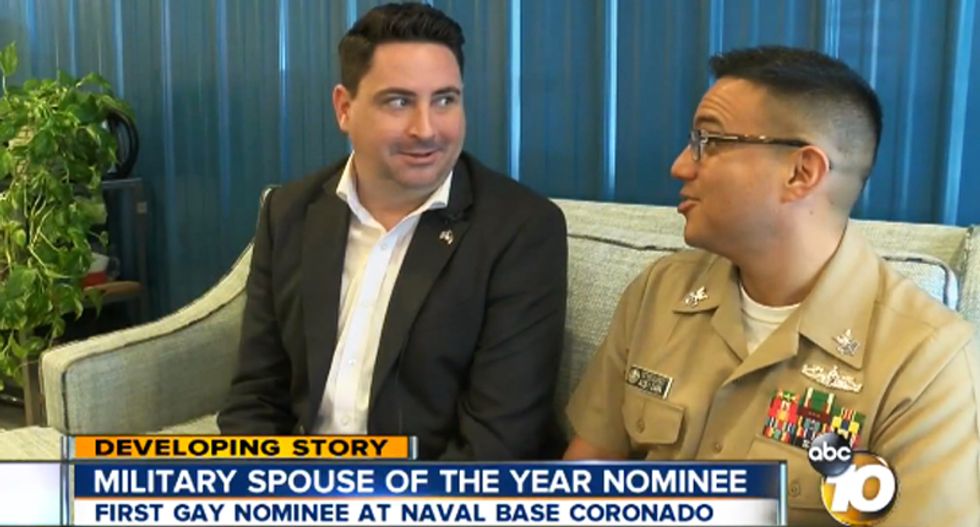 For the first time in the history of the award, a San Diego naval base has submitted the name of a gay spouse of an active duty serviceman as Military Spouse of the Year.

According ABC10 San Diego, Naval Base Coronado turned in the name of Brian Alvarado, husband of Boatswain’s Mate First Class Matthew Alvarado --  a 17-year veteran of the U.S. Navy.

In an interview, the couple stated that they met two years ago and decided too marry.

"I'm proud that he put his head down and he did his work," Brian said. "He got his job done and he served his country, and he made it about the Navy and not about himself for 15 years … It is joyful that now he can have both -- with his head up."

The two men stated the scariest moment they encountered was when they attended the naval unit's Christmas party as a couple.

"That moment when you say, 'Hi, this is my boyfriend Brian,' and what is the reaction going to be?" Matthew remembered.

"They didn't see us as a gay couple," he added. "They just saw us as a couple with their command, and it was fantastic. The unit as a whole took him in as part of the family."

Since that time, Brian has worked in conjunction with other military spouses on the base. He has raised money for a sailor whose house burned down, helped vets get jobs, and provided assistance to other sailors attempting buying homes through a VA program using his experience as a Vice President of Marketing for a real estate brokerage firm.

Impressed with his good deeds, Brian's nomination was put forth by the wife of Matthew's commanding officer.

The award is given by Armed Forces Insurance. The list of base winners can be found here.

Watch the video below from ABC10 San Diego: