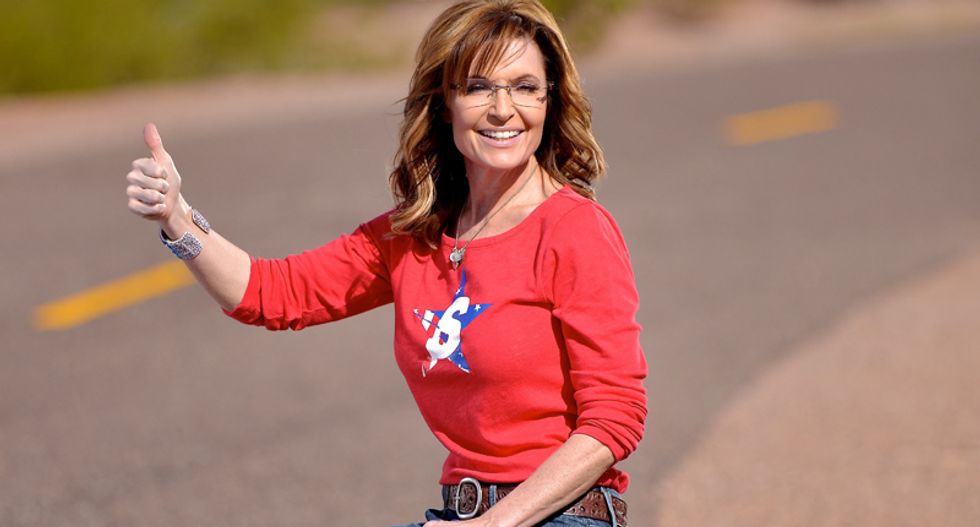 The new year is here and we somehow managed to survive gay marriage officially replacing opposite gender marriage in 2015 without Jesus destroying America like all the grifter Christian evangelicals said He would. Or maybe Jesus forgot about it in all the excitement leading up to His recent birthday.

Who knows. He never calls, He never writes, He doesn't even text or snapchat.

And speaking of grifters .... former Alaska governor/GOP vice presidential candidate/Fox personality and television mogul Sarah Palin is bailing on something else again.

Right before the holidays, la Palin put her 8,000-square-foot Scottsdale pied–à–terre up for sale for a cool $2.499 million -- or about twice what the city of Wasilla had to pay in excess costs when she boinked up negotiations for a new ice rink/teen meth hangout back when she was mayor.

Palin originally paid $1.695 million for the 6 bedroom, 6.5 bath, 6 car garage with one "wine" cellar home in 2011, back when Roger Ailes was still paying her the big bucks despite thinking she was "an idiot."

What is surprising is that asking price for Casa de Alce Borracho has increased about 50 percent in the past four years despite, "the expeditious transformation of America via nonsensical acts such as this, for it will be attempts at a rapid decline until and unless this Administration's equal branch of government - our elected legislative branch - doesn't start fighting back to protect America's economic opportunities leading to security and solvency."

(Translation for above: "ObaMuslim is taking America to hell in a hijab.")

Why is Palin leaving Arizona in the broad daylight -- besides the obvious reason that it's Arizona? Who knows? Maybe with a second (or third, if you are Andrew Sullivan) grandchild in the recently born Sailor Moon Keystone Light Palin Palin, Sarah wants to sock that money away for a snowy day when she'll need it for college tuition or bail money -- once daughter Bristol is back on her feet again.

Where does that money go? If you guessed "keeping Sarah Palin and family in the style they are accustomed to having the rubes and yokels pay for" -- you're probably right.

Then again, maybe she'll invest a bit in the campaign of future President Donald Trump with the expectation that he'll hire her to head the energy department.

Relax, he'll probably destroy the country prior to her hearings and before she gets settled in--  after which she'll quit that too.