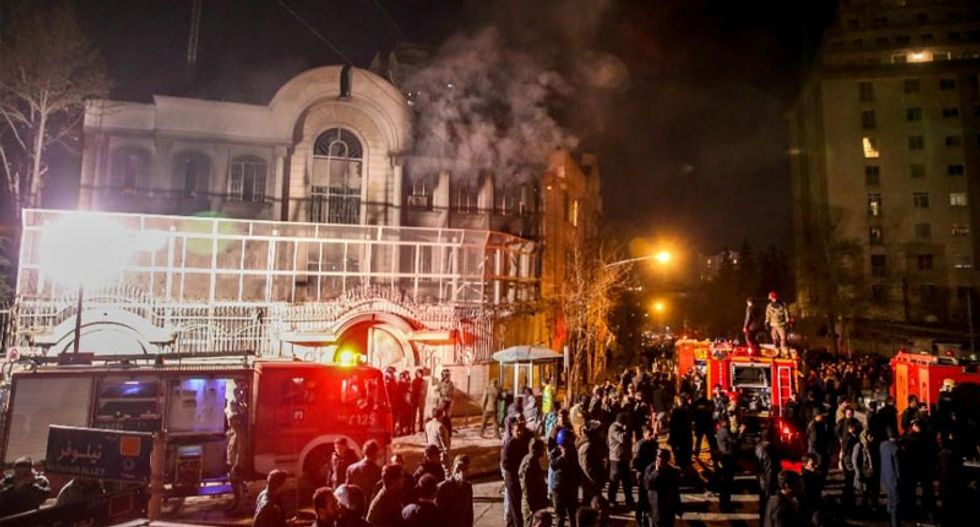 Iranian protesters set fire to the Saudi Embassy in Tehran during a demonstration against the execution of prominent Shiite Muslim cleric Nimr al-Nimr by Saudi authorities, on January 2, 2016 (AFP Photo/Mohammadreza Nadimi)

Saudi Arabia on Tuesday accused Iran of a nearly four-decade record of "sedition, unrest and chaos," as the international community tried to calm tensions between the regional rivals.

Tensions between Sunni-ruled Saudi Arabia and predominantly Shiite Iran reached a new high this month when Riyadh and a number of its Sunni Arab allies cut diplomatic ties with Tehran.

"Since the Iranian revolution in 1979, Iran has established a record of spreading sedition, unrest and chaos in the region," the Saudi Press Agency (SPA) quoted an unnamed senior foreign ministry official as saying.

"During the same period, the kingdom has maintained a policy of restraint in spite of having suffered -- as have neighbouring countries -- the consequences of Iran's continued aggressive policies."

The official said Iranian policy was based primarily on the idea of exporting revolution.

SPA published a 58-point "fact sheet", prepared by the foreign ministry, "to illustrate Iran's aggressive policies" and to refute "the persistent lies" from Tehran, including an article by Iran's Foreign Minister Mohammad Javad Zarif in The New York Times last week.

Zarif said Saudi Arabia had devoted itself to trying to stop Iran's nuclear deal with world powers and blocked attempts at dialogue in the Middle East.

"Some in Riyadh not only continue to impede normalisation but are determined to drag the entire region into confrontation," Zarif wrote, arguing that the Sunni-ruled kingdom was "driven by fear that its contrived Iranophobia was crumbling".

"Saudi Arabia seems to fear that the removal of the smoke screen of the nuclear issue will expose the real global threat: its active sponsorship of violent extremism."

Over the weekend, a historic international deal lifted crippling economic sanctions on Iran in return for a scaling back of its nuclear capabilities.

Six major world powers including China helped broker that agreement. But Riyadh fears it will further embolden Iran, which it accuses of interference in countries including Yemen and Syria, where Riyadh and Tehran support opposite sides in civil wars.

China's President Xi Jinping was in Riyadh on Tuesday, ahead of a visit to Iran, after a Chinese diplomat last week urged "calm and restraint" between Iran and Saudi Arabia.

French Foreign Minister Laurent Fabius, also in Riyadh on Tuesday, was another voice calling for "de-escalation".

On Tuesday, Sharif continued his efforts to defuse tensions, in a meeting with Iranian President Hassan Rouhani.

After Zarif's article, Saudi Foreign Minister Adel al-Jubeir also took to The New York Times, making on Tuesday similar points to those issued by the unnamed official on SPA.

"Superficially, Iran may appear to have changed" because of the nuclear deal, Jubeir said in the newspaper.

"The real question is whether Iran wants to live by the rules of the international system, or remain a revolutionary state committed to expansion and to defiance of international law," Jubeir wrote. "We have yet to see that."