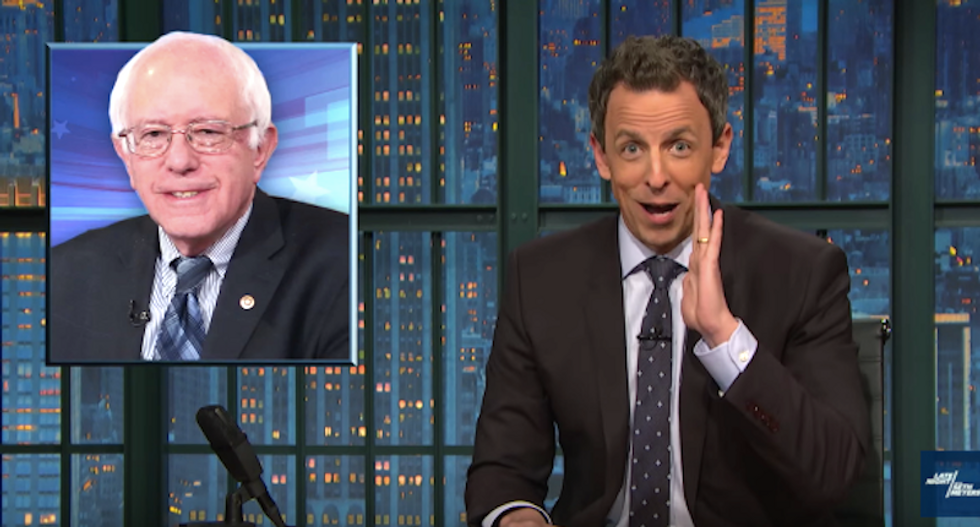 Hillary Clinton is watching a Democratic challenger cut into her lead just weeks ahead of the first primary elections -- but Seth Meyers said this was nothing like the last time she watched her frontrunner status evaporate.

"That's right, it's 2008 all over again -- a young, handsome, charismatic challenger has entered the race," Meyers said, flashing a picture of Martin O'Malley, "and he's losing by 40 points to Waldorf from the Muppets."

Younger voters, in particular, back Sanders -- who they have photographed flying coach and waiting at airline gates with other passengers, watching movies.

"Was he watching his own movies or was he watching other people's movies over their shoulder?" Meyers wondered. "Because that sounds like how Bernie would watch movies on the cheap: 'I don't pay for movies -- I just grab free peeks.'"

"Bernie Sanders is so frugal that, if he's elected president, he might travel on Bus Force One," he added.

Sanders enjoys a whopping 68-26 advantage over Clinton among voters younger than 25, and Meyers said the rapper Killer Mike was probably not alone in his explanation for backing the Vermont senator: "(I was) smoking a joint and reading his tweets."

Young people typically prefer youthful politicians and celebrities -- but Meyers suggested that the 74-year-old Sanders had overcome that obstacle and joined some exclusive company.

"Every so often an old person transcends their age and enters what we call 'the Betty White zone,'" Meyers said. "It's a place reserved for the elderly who are so cool they make young people believe it will actually be fun to get older."

"Barack Obama promised hope, but Bernie Sanders promises hope in a different way," Meyers continued. "Kids watch him and think, 'Man, I hope I'm that cool when I'm 74 -- I'm going to have one suit and yell about everything.'"