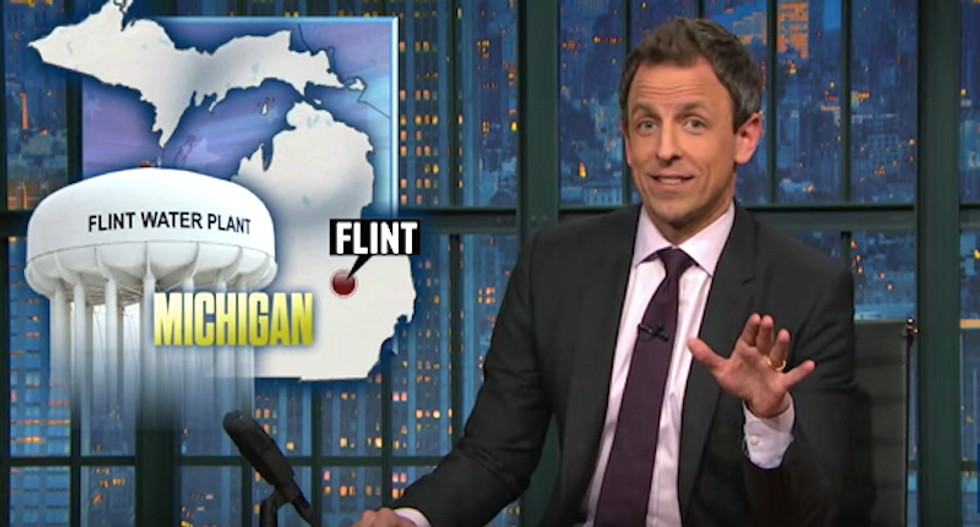 Seth Meyers took a closer look at the ongoing water crisis in Flint, Michigan -- where state officials helped make the city's water too corrosive to make cars but continued to allow residents to drink and bathe in it.

The "Late Night" host said Americans take clean drinking water for granted -- but Michigan officials ordered city officials to save $100 a day by switching from pretreated Lake Huron water from Detroit and instead drawing its water from the polluted Flint River.

Residents immediately noticed the difference in April 2014, complaining about the taste and odor of water running from their taps.

"I'm no expert, but I'm pretty sure water isn't supposed to smell," Meyers said. "You never get on the subway and say, 'Ugh, this car smells like water.' Also, on the subway -- it's never water."

The highest sample found 13,200 parts per billion -- more than twice what the Environmental Protection Agency determines to be toxic waste.

"The water was twice as poisonous as toxic waste -- or just slightly less poisonous than a Monster energy drink," Meyers said. "The water was so bad it caused car parts to rust, and yet they let human beings keep drinking it."

Meyers said the evidence strongly suggests state officials knew about the problem but hid the danger from residents by altering mandated reports to essentially change an F grade to an A grade.

One resident said Snyder's claims that he warned them to stop drinking water as soon as he learned about the problem was "bullcrap."

To add insult to injury, Flint's mostly poor residents have been required to pay for water that's not safe to use.

"They're paying for poison -- the only way you should ever pay for Poison is through Ticketmaster," Meyers said, referring to the glam metal band. "Give them 'Something to Believe In.'"