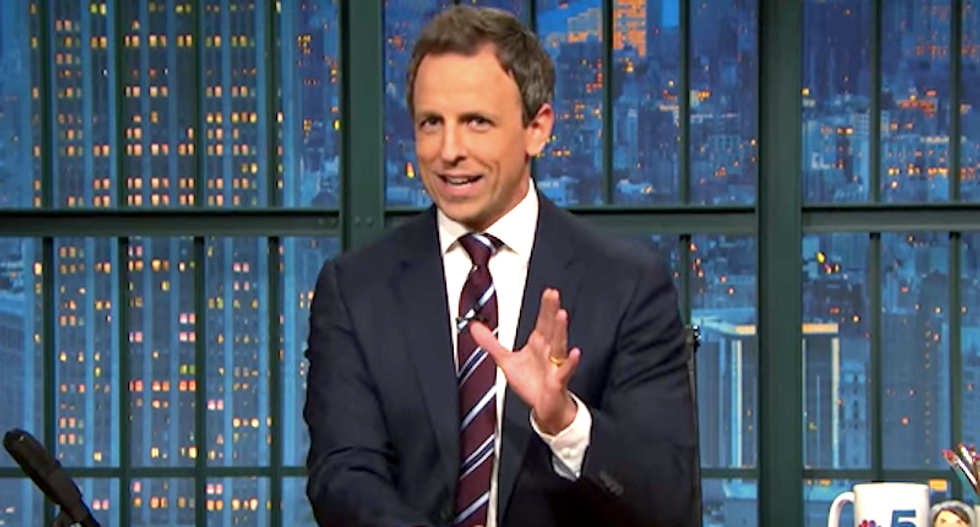 Seth Meyers said only Donald Trump could flatter himself while whining that an anchor for a conservative news channel had been unfair to him.

The Republican presidential frontrunner has vowed to skip Thursday's debate on Fox News because he thinks moderator Megyn Kelly treats him unfairly, although he boasted that he was probably the best thing that had ever happened to one of the most famous TV news personalities.

"A Trump complaint is also a Trump brag," Meyers said. "That's Donald Trump criticizing someone and then throwing in a compliment for himself -- also known as a #TrumpleBrag."

Trump ripped a Fox News statement mocking his decision by saying it appeared to have been "written by a child."

"Take it from Trump, a guy who knows how to write like a child," Meyers said.

He then read the statement issued by Trump in response: "As someone who has a personal net worth of many billions of dollars, Mr. Trump knows a bad deal when he sees one," the statement read. "Unlike the very stupid, highly incompetent people running our country into the ground ... Mr. Trump doesn't play games."

Meyers wondered aloud whether the real estate tycoon and reality TV star had actually written that statement or dictated it to Siri while power-walking on a treadmill.

"That sounds like a 12-year-old's interpretation of the movie 'Wall Street,'" Meyers said. "'No more playing games, I'm a big, important businessman, and I have a lot of billions of dollars.'"

Trump's rivals are trying to use the petulant tantrum against the frontrunner, but Meyers said his supporters have stood by through far more outrageous insults against entire groups of people.

"How dare you, sir -- you can attack Mexicans and Muslims and black people, disabled people and veterans, but skipping the seventh of a 13th scheduled Republican debates is a bridge too far," Meyers said.

Watch the entire segment posted online by The Late Show With Seth Myeres:

"Beto O'Rourke targets South Texas in bid to win back Democratic voters he'll need to beat Gov. Greg Abbott in 2022" was first published by The Texas Tribune, a nonprofit, nonpartisan media organization that informs Texans — and engages with them — about public policy, politics, government and statewide issues.

Critics of post-crisis profiteering responded with disgust to new reporting that private financial institutions in the U.S. are taking advantage of the federal government's failure to respond swiftly to disasters by providing loans—to be repaid, with interest, by taxpayers—to landlords affected by floods, wildfires, and other catastrophes that are growing in frequency and intensity due to the fossil fuel-driven climate emergency.

"A few profit and the rest of us pay."